Jannelle has a minion!

Bio
Art
The inspector rubbed his temples as dozens of officers trampled all over the crime scene. "For god sakes" he muttered, waving over the head officer "Can't you guys clear out a little bit? I need to assess the situation."

The officer grunted and shook his head. "Nothing to really assess. It's pretty cut and dry. Science lab go boom, 2 missing, 1 casualty." The inspector really hated when the police got angry that he was just doing his job. There was a lot more to the story than they were letting on, but it was apparent they weren't going to cooperate.

"That may be so, but I'm still here to do what I was hired to do, so if you don't mind?" The inspector stated, giving the officer a withering look. He wasn't an imposing man, but he did have a reputation on solving things that otherwise wouldn't be solvable. At his gaze, the officer backed down, though scowled while doing so.

"Fine. I'll cooperate with the investigation, but only because it's all such a strange set of circumstances, and honestly I'm curious as to what kind of logical explanation you might come up with." It was clear that despite his initial attitude, the officer had softened a bit under the pressure.

The inspector decided that he liked the officer after all. Besides, there was a lot that needed to be done, and cooperating was the best bet as to find out the truth- no matter how bizarre. "Alright, tell me what you know."

The officer began to tell him the best that they could figure out so far: "Dr. Cho Jannelle, age 47, single, Masters in biochemical engineering as well as a bachelors in physics, is the head researcher in this science facility. At about 11:44PM last night, the neighbors called in to report a loud explosion coming from the laboratory. Upon arrival, our team found all the markings of an explosion. Debris, blood, and this weird purple goop." He nudged a bit of the goop with a gloved hand, but it lay inert and didn't react to his touch. "We found the Doctors notes, and apparently she was working on a time machine." He scoffed, as if such a thing was beyond comprehension. "But, if you could believe it, that isn't the weird part..." He trailed off and looked at the inspector expectantly.

Realizing that he would have to engage the man further to get anymore information, he pressed him. "Alright, what is the weird part then?"

"Well" The officer said, starting to walk toward the front of the lab where a waiting ambulance had its tailgate down. "We know that Dr. Jannelle also had an intern working with her today, as well as an AI robot--- er cyborg... oh I always get those mixed up... you know, the robots with human anatomy and some biological stuff? Anyway, we found the robot, according to Jannelle's records, his name was 8. Weird name if you ask me... anyway, he's still intact, though definitely shut down. All his biologicals are dead. A piece of the uh... I can't believe I'm saying this-- a piece of the 'time machine' is lodged in his chest cavity, and it appears to have fried all his circuits."

"That's not so weird" the inspector said, despite not believing his own words. It was pretty weird, but he would never admit it. He glanced up at the clock. What was left of it showed 11:43. He sighed and checked his own watch instead. It was coming up on 2:30AM, and he was already tired of the day.

"Dr. Jannelle is missing, along with another of her assistants. Xyon Fielder hasn't been seen since the disaster, although there have been one or two reported sightings by townsfolk." The police officer flipped through his notebook. "Xyon is blind, and his family is very concerned for his safety. I can't imagine what could have happened to him, I mean, it's not like he could go too far? We have his seeing-eye dog in our care. Just a broken leg but nothing more serious, thank goodness."

The inspector nodded. Not knowing if a member of your family was living or dead was a horrible burden on your soul.

There was a pause in the air, and the Inspector felt something tickle the inside of his ear. He reached up and scratched it, thinking that a bug might have flown into it.

Suddenly, the police officer was shaking him. "Inspector!" he shouted, inches from the mans face. The inspector blinked and shied away "why are you shouting at me?!"

The police officer looked confused for a moment, and glanced down at his watch. He shook it a moment and then held it up to his ear. "I'm pretty sure the time is right. Man, we must have already been talking for a while. Sorry for holding you up, but daylight is breaking- look." He pointed to the sky and the inspector followed his gaze. It was true, the sky was getting lighter.

"Oh, then I guess my watch must be wrong" the Inspector said, however, when he looked down at his watch, it showed the same time as the Police officers. "er... never mind. What weird thing did you want to show me?"

"Yeah well, there's this." He stopped behind the ambulance, where two girls were sitting. They were identical in every way, from the position of their freckles to the cadence and tones of their voices. "They both claim to be an intern in the facility who was working with Dr. Jannelle. They both claim to be Jayla Kline, a 26 year old grad student at the University of Centropolis. Their DNA is an exact match to the Jayla we have on record, so are both their fingerprints. They also claim that they are both Jayla, but uh-- and this is where it gets confusing-- Jayla was split in half? Apparently, they each embody different aspects of the original Jayla, and that this happened because of the time machine exploding."

The inspector looked at the girls. One appeared to be very frightened, and was huddled under a blanket, staring at them with wide eyes. The other one though, seemed as if she was right at home. She was actually kicking her legs back and forth from the back of the ambulance and humming.

"Oh." Was all the inspector could say. "Well I'm actually speechless..."

As the police ransacked her lifes work, Jannelle floated silently among them. She wasn't dead, that was for sure, but they couldn't see her. Everything seemed to be moving in slow motion, as if she was The Flash or something equally as crazy... but every once in a while, things would go back to normal.

She had no idea what had happened beyond the obvious. Her time machine had exploded and destroyed more than a decade of research, and she was furious about it. As the machine exploded she got covered in this weird purple stuff that somewhat reminded her of grape jelly. Then she blacked out.

When she came to, she tried to talk to people but they didn't hear her, and when they walked they went right through her. When the inspector arrived, she thought that she would for sure get some kind of answers, but he didn't respond to her either. What was stranger, was when she tried to yell to him, it seemed as if her mouth was sucking the air instead of expelling it. It felt like it was filled with cotton candy, and it tasted splendid! She tasted the air periodically, and each time she tasted it, she felt herself grow stronger.

Each time she tasted whatever it was-- for she was certain now it wasn't the air-- it tasted like her most favorite candies.

It seemed like hours, which for her expanded on her consciousness like days and weeks, but finally her lab lay abandoned. She wondered what was going to happen to the Jayla's and she hoped they would come visit her sometime, even though she knew they couldn't see her. She glanced over at the corner where 8 still lay dead. She had loved that cyborg... he had always been so helpful, but she knew he was gone. She had built him herself, and she knew when he was going to move no longer.

She attempted to sigh in anguish, but instead she began to eat the air once again. She chewed fervently, tasting the sweetness of butterscotch, before finally closing her mouth. The moon peaked high in the sky, which was funny since she could have swore it was around noon.

She furrowed her brow. Something weird was going on, besides the obvious. She opened her mouth again, sucking in the air around her. Her mouth was met with the bitterness and lusciousness of dark chocolate, and as she ate, time went into overdrive.

She wasn't eating air... she was eating time itself.

As she ate, she saw professional cleaners come and take away all the debris in what was left of her lab. Days and nights spun by in a matter of seconds, and she felt her belly grow full. At last she couldn't eat anymore, and without warning, felt her body touch the floor.

She had been floating around since the accident... but now she was finally standing?

She ran over to the ladies bathroom as quick as she could, which for her was especially hard since she seemed to still be covered in the thick purple jello. She bumbled along, tripping and flailing as she made her way to the bathroom. Finally, and with great effort, she was standing in front of the mirror.

Her first observation was that a piece of the time machine had pretty much replaced her head. She had a weird clock face for an actual face, and the visual disgusted her. She had been wrong when she thought she was covered in purple goop. Instead she corrected herself- she was a scientist after all. She was MADE of purple goop. Pieces of her dropped to the floor and reformed again, perpetually dripping throughout her body.

"ugh!" she yelled, repulsed, as she stumbled out of the bathroom.

Forced to roam the earth, immortal, eating and stealing moments whenever she could, just to feel alive.

Instead of becoming the first Master of Time, Dr. Jannelle had been made a slave of time itself. 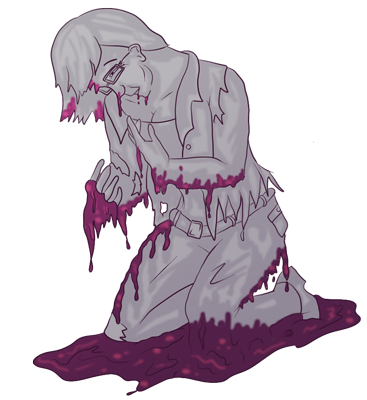 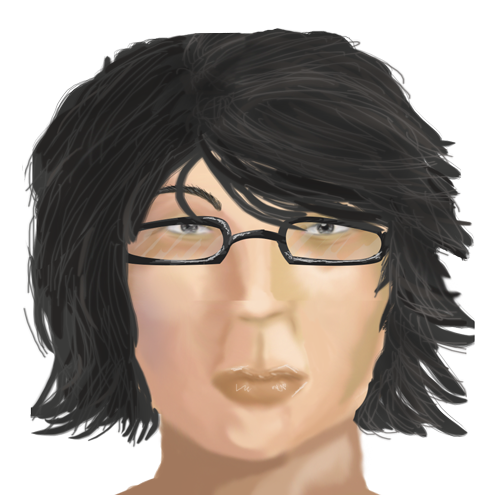 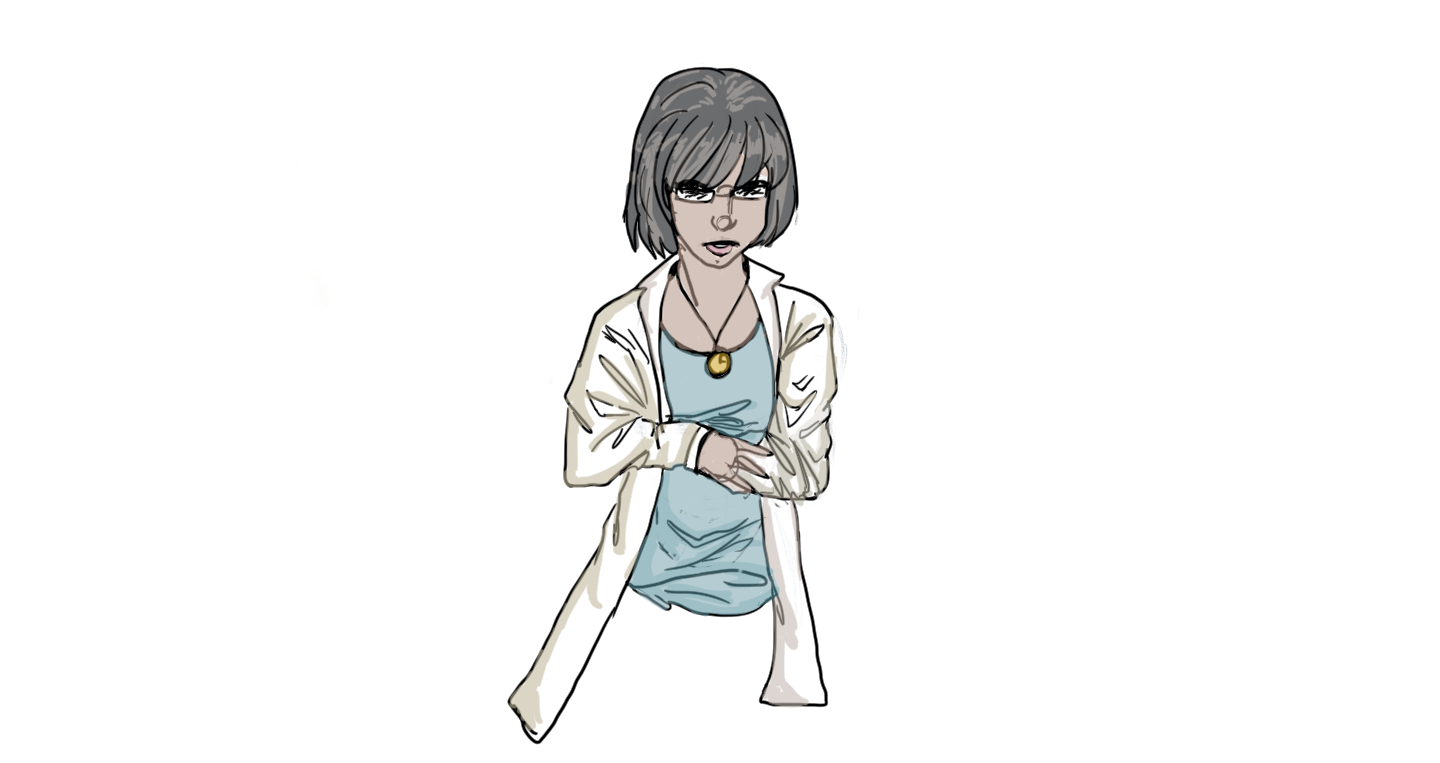 Art by User not found: normandy

All art done by me User not found: gryffindor unless otherwise specified

Story done by me User not found: gryffindor

Shards of Space and Time

Time Travel and You