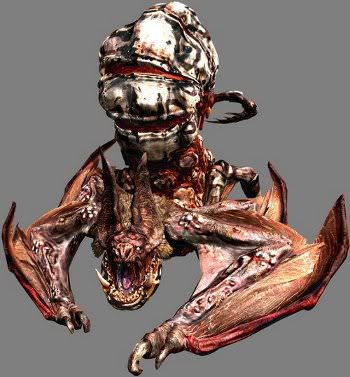 Once a Common Lasirus, this poor little guy became infected with the Las Plagas parasite. His master,

Wesker, is still unsure of the origins of his coming into contact with the parasite, but suspects foul play. Popokarim, or "Popo," is highly unstable. Users are advised to NOT approach unless supervised by his master.

1) The infected bat, classified as Popokarimu, can travel in the air and on the ground.

4) Weaknesses - Although its shell is sturdy enough to protect it from gunfire, the soft fleshy underside of its tail leaves Popokarimu vulnerable to attacks

3) Popo only responds to his master,