Kronus has a minion! 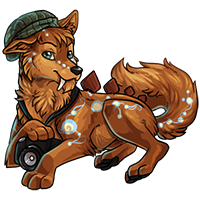 The all too familiar sound of the shutter closing and opening again cut through a nearly silent evening. The whirring of the flash recharging curved a smile over Kronus’ lips. It was comforting being behind the lens of his camera, viewing the world in a different way than most.

Drawing in a deep breath of the ocean air, his hazel eyes scanned over the crashing waves as they reflected the sinking sun’s dying light. It was a picture-perfect sunset, perfect enough to pad his wallet with some bills hopefully. Photography wasn’t only his one true passion, but it was a means to getting by as well. Sadly it was a thought that dogged his mind often, stealing away some of the peace of the beautiful scenery before him.

The ocean seemed to have a way to wash away the bad feelings though, at least for awhile. Inevitably, the water always drummed up memories from the past. His childhood home had nestled up against the shore of a large lake, the constant lapping of waves were the theme song of his life. Not such a bad life… had his parents understood him.

At a young age, Kronus had known he was different from most of the boys he went to school with. They chased girls, pulled their hair and giggled themselves into fits when notes got passed their way. He wasn’t the only one to notice he was different either.

Perhaps his parents had hoped they were wrong, but one shared kiss with one of the boys in his class made up their mind. Before he knew it, his father was in a rage and Kronus was yanked from public school. Instead of staring out the window of the classroom watching the boys and girls play, now he was stuck staring out his bedroom window watching the lake swell and shrink with the seasons.

Homeschooling was bad enough, but when Kronus’ father proudly announced he’d be going to a Christian reform camp, Kronus nearly bolted for the door. If not for the fear of his father rooting him in place, he would have. One shared kiss with a schoolmate and suddenly he was sick? He didn’t understand why his parents were in such a frenzy. Or, at least his father was while his mother sat idly by, twiddling her fingers and avoiding even looking at Kronus.

The day he left for reform camp was one he’d never forget. The proud prattling of his father echoed down the halls as his mother wept softly, sniffling as the three of them walked to the car. Rain beat down on the windshield, wipers slapping away the droplets as fast as they could, masking the gentle sobs of his mother’s as her shoulders rose and fell in quick succession. The radio crackled alive as his father turned the knob, obviously irritated at the sobbing woman next to him and the inconvenience of having to drive in such horrid weather.

Staring out the window the whole time, Kronus just watched the world melt away, drowning under the inches of rain as the skies seemed to open up and let the deluge fall. It was certainly reminiscent of how he was feeling, saddened his father thought he was ill, and sickened at the idea his mother refused to stand up to the man she had married. Even more so, Kronus’ older brother had sat silently at home, his bowl of cereal that morning far more interesting than the fact he wouldn’t be seeing Kronus for several months or more. His brother had been his confidant, his only friend and the only other person Kronus could relate to and yet his brother had let him get taken away to a strange place with strange people.

The car jerked to a stop in front of the camp office, the yellow light cutting through the gloom of the rainy day. The words his father proclaimed in that moment fell on deaf ears; something about becoming a real man, but Kronus didn’t listen. Any respect he’d had for his father was long gone and any words he said meant nothing. Soon the doors were opened as Kronus was ushered through the rain, half shielded by a tattered umbrella. Handshakes, smiles, nods of approval were all greetings from the counselors at the camp. They were just puppets in this whole charade, padding their own pockets from people like Kronus’ father who were too stubborn to realize he didn’t need to be cured of anything.

In a flash, his parents were gone, trucking down the flooded dirt road that had led them there and leaving Kronus in the care of the camp’s staff. The following months were the loneliest time in his life, trying to act the part of a reformed child just to get back home. All the other boys at the camp were just as tortured as him, forced to pretend to be something they weren’t so the world could feel better about where their souls might go when they die. What a crock.

Months ticked by and despite himself, Kronus had made a couple of friends at the camp. He’d wanted to stay detached, just trying to get home as quickly as he could, but being there alone was difficult when so many others were just looking for some companionship. And as much as he just wanted to go home, he craved a connection with someone like himself. He just didn’t know that in doing so, he’d find a way home much more quickly than expected.

One evening, he’d planned to meet with one of his friends and simply go for a walk. Some fresh air to clear their minds, or so they told themselves. Off the beaten path they went, sneaking into one of the camp offices in search of some privacy. What they found was shocking to them both; a camp counselor and one of the campers in one of the offices, lips locked together. They were both so surprised, they didn’t have time to hide before the counselor spotted them. Less than a day later, both of them were being exiled from the camp on the grounds of a lie. The counselor claimed to have found Kronus and his friend in a compromising position, but with the promise of going home, Kronus didn’t bother to argue.

The whole ride home, his father had ranted and raved about how disgusted he was with Kronus’ behavior. Mostly he just stared out the window and ignored his father. The only thing he couldn’t brush off was his mother’s continued passiveness. It hurt that she sat there in silence, weeping like she always did.

He couldn’t take it any longer. The moment he stepped foot in the house, he was packing his belongings, stuffing them into an old suitcase. The whole time his father dogged at his heels, shouting his unwanted opinion and chastising him. All he wanted to do was escape, and that’s what he intended on doing. A few articles of clothing, his old camera and enough money to buy a bus ticket was all he needed before he walked out the door. For the first time, his mother shouted, but it was only his name. The crackle of her voice cut him deeply but he didn’t stop. He had to get away from his father and escape this nightmare.

Sighing, Kronus lifted his camera again, snapping another photo of the sunset over the ocean. Though he’d run away so many years ago, it still stung like it was yesterday. Since, he hadn’t been back to see his parents or his brother. He’d come to the city and never looked back. He’d struggled along the way to find his place, making enough money as a freelance photographer to get by and delivering newspapers otherwise. Struggling in the city was like a dream compared to living with his parents though. The thought made him smile again as he watched the rest of the sunset in silence. He’d made it out, and now he could be himself again.