Anonymous has a minion!

The One Truth the Hayt 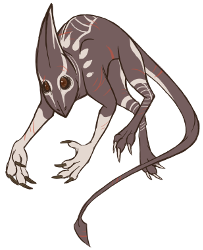 Can't give up on the past
when the past never ends.


Paulo Anonymous is a freelance graphics designer in his mid-20s from Chile, who is mainly earning his money by publishing "artwork books", containing violence, torture, extreme gore, cannibalism and murder.

His alias and also the main character of the books is a creature called "Anonymous", who combines two of his biggest loves: the Selk'nam (according to his father their family has direct ancestors there) and aliens.

His days he mostly spends at home, drawing new artwork, not even giving his few friends from his early youth any sign of life until he feels the need to socialize with them for a few hours, before "vanishing into his cave again", how they call it.

Until today his friends are still amazed by the fact that someone with his lifestyle and gruesome hobbies could find love. Someone who spends most of his days alone, claiming that "he is not interested in a relationship at all". Someone who constantly talks about homicide and cannibalism. Someone who would change his vegetarian lifestyle for an all meat diet if eating human beings would be acceptable.

But much to the surprise of his friends, and even himself, he found a platonic soulmate who accepts him the way he is. While his friends still ask themselves how this guy manages to endure Anonymous' often werid and scary behavior (even though they share so many similar interests...), Anonymous himself is still not sure why someone would want to be together with him. But he secretly enjoys his soulmate's company, even agreed to live together in the same house. Anonymous wouldn't want him to leave. Ever.

He'd rather eat him alive than letting him go...