Egan has a minion!

"You are more than you seem
You see into space, I see in your face
The places you've been
The things you have learned
They sit with you so beautifully..." 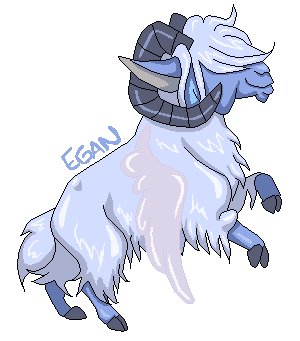 Egan's been in Heaven for a longer time than the others, in fact, no other angel can tell for how many years he's been there. If you go around and ask, every angel will tell you they remember being greeted by Egan when they made their ascention to the skies, after passing away. He's ageless. Nobody knows what his real story is, too, for whenever asked about his past life he makes up a different tale, different names, different lands.
Truth be said, he does like to tell stories and nobody knows whether they are scenes he's watched, lived or if he's just making it all up. But the details he tell... the emotions... Well, he does have a lot of time to think about those things, too, so it's really a mystery!
Egan also loves to hear stories, even though he's best at telling them, but for this reason he thought it'd be a fun thing to descend from the skies and, why not, just leave the gate open. Let the angels roam and the guards worry, but not him! He had other plans. 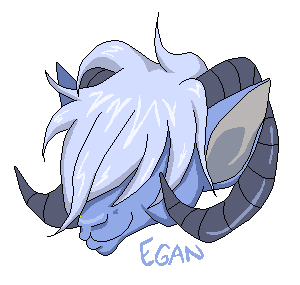 Egan likes to spend most of his days taking mental notes on whoever passes by. He can be found easily either floating on some cloud or lying on a grassy field — well he was certainly a herbivore in his past life, for his habit of munching a nib of grass here and there while he's at it — hoping for any travelers to stop by and share their life stories. Or hoping for people that will gather around to hear his marvelous tales of heroes, villains, victims or adventurers. He'll be telling stories for a whole day long if he isn't stopped, and because of this infinite number of things to tell, his wisdom is one thing to be noticed. He's incredibly wise, but so laid back at the same time. He's got no hurry, no worries. He just wants to tell his stories. He'll even tell yours if you come across this particular storyteller one day and share your journey! But don't worry, nobody will ever tell him better than he will.
And that makes me and the others wonder... Who is this creature and how come he create such beautiful things? It's like he's been through all, and yet, he's sitting there like it's no big deal. And why the other angels show such respect towards him, when he's so easy about it...

"You know there's no need to hide away,
You know I tell the truth, we are just the same;
I can feel everything you do,
Hear everything you say,
Even when you're miles away
Coz I am me, the universe and you."

Jessi;
Story and art by

Know It All Rag Doll