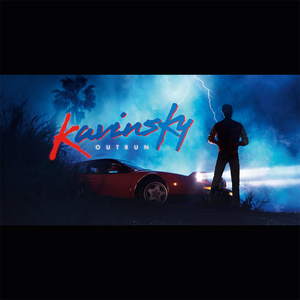 "The year was 1986 ... He was a teenager like any other, dreaming of his heroes and in love with a girl, but on a thunderous night along a ragged coast, a mysterious red car came to him, its power lighting his eyes bloodred.

In a flash, all was lost in that hellfire of twisted metal when our hero emerged from the burning wreckage he and the car had become one, their souls spliced forever, leaving him to wander the night alone, invisible to everyone ... but her.

So I just could lead the way.
There's nowhere to ride around me.
No one around, it's amazing.

Where to ride when it's raining?

I come to life in my fast, fast car.
Young life, can that ever be ours?
My Testarossa same color as Mars.
Buckle up, you are now riding with a star.

I'm going to tell you something you don't want to hear.
I'm going to show you where it's dark but have no fear.
There's something inside you.
It's hard to explain.
They're talking about you, boy, but you're still the same.

As the lightning strikes, you have to start the fight.
You're shifting gears, you're punishing,
you step through the night. I know you, I know you.

They say a flap of a butterfly's wings can doom your fate, that the roads sometimes take backward what they had given, but true love never dies. And now you know how the legend of the deadcruiser was born, but what you don't know is there's a gap between the living and the dying.

Some say they've seen the deadcruiser in a flash of lightning around the shadowy curves of the highway. Some say he was just a kid who met his fate in a fiery crash but anyone fool enough to venture out onto that treacherous road should know one thing - there's no turning back."

( Lyrics from Kavinsky's OutRun album
Personal thanks to

Coydog for adopting OutRun out )