Mafia has a minion!

The secret life of Mafia

He staggered up to the only lit house on the block, pushing himself through the dark backyard. He came to a window and pressed his face against it, the room so lit, he could almost watch the TV inside. A family sat comfortably upon leather couches enjoying what looked like a routine evening. He looked down breathing heavily, his eyes trailed back to the line of blood he left behind. Moving his arm from his side he revealed a bloody wound that while bleeding profusely, wasn't much bigger than a thumb.

He slid down the side of the house and landed sitting at the base on the grass. He took off his black blazer, leaving a blood stained previously white shirt. He forced himself to move forward as he wrapped the blazer around his chest to try and stop the bleeding of the wound. He wiped the blood on his black slacks, then put his hand to his forehead attempting to see if he'd got a fever from the loss of blood. He did. Breathing heavy he brought his right arm over his chest. The metal was getting heavy, it made crunching noises as he turned it pressing one of the buttons on the inside. A hologram popped up of a wolf-dog. He didn't really know what to expect out of this. All he knew was the machine was top secret and he'd stolen it for his own personal gain.

He looked around for a moment, hesitantly he pushed a green button. Green means go right?, he thought to himself. From the second he tapped the button the mechanical arm began to transform into fur and paws, it crawled up his arm changing the base and curving it, as it passed his arm he was thrown to his knees in a doggy style position. His back started to warp and curve into a weird shape. His legs repositioning and shortening then turning into stiff pieces of fur and bone incapable of standing up straight. As it came back over his body and started to reach his face he got a little scared and attempted to scream. But it was too late, the transformation was almost done and the only sound that came out was a muffled bark. By the time the transformation was complete, he was howling as loud as he could.

Just then the porch light went on. 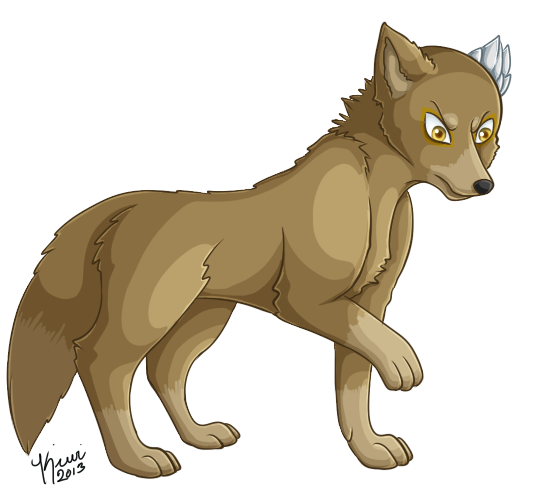 "What was that?"
"I don't know Fred, go check it out", A conectect female voice replied.


Looking around him he could see his clothes on the ground. He panicked and started digging in front of him burying the the white shirt and black blazer along with his black slacks and shiny black dress shoes. Just as the door opened he finished burying the last piece. His gun. A tall, slender man walked outside to find a large brown-coated wolf-dog lying on his porch, bleeding profusely. Fred, as the woman referred to him, stepped into the light which revealed his features, he couldn't have been more than 32 with dirty blonde hair and blue eyes. Fred, looked very pleasant, the moment he could see the canine he started screaming for help. The female appeared behind him, a short woman that couldn't have been more than 5 feet tall, at least a foot shorter than the man. She had long locks of dull purple hair and hazel eyes.

"Mommy, Daddy!", A high pitched whine erupted from the inside of the house and a young boy darted out the door clinging to his mother's leg. The boy was at most 5. He was in a pair of dragon pjs that covered his head and body only leaving his face and a little bit of blonde hair showing. He looked down to find the dog, In return the new found canine stared back. The piercing blue eyes of the boy not cutting the gaze. After a few moments the boy moved to his father, tugging on his leg. he looked up at his father.

"Daddy! You got me a dog?! This is the best gift ever! Thank you, thank you!" The boy ran over to the dog, that was now breathing very lightly. The boy's smile quickly dropped when the dog became unresponsive to pets.

"Daddy, what's wrong with him?"
"He's hurt, bad."
"You'll fix him right daddy? Like you do all the other puppies and kitties?!"

He moved over to the dog, patting it on the head drifting his hand across his ears. His finger started to bleed and he turned the dogs head to find an ear made completely out of metal. He looked at the dog with little reaction and said faintly to his son, "Yes Jake, I will fix him."

He looked back into the gold eyes of the wolf-dog, thinking to himself. What are you.... It was just his luck the one house he found the owner was a vet. He was quickly nursed back to health and kept as a pet. He became content with this life, though he didn't know how long it might last. Days went by and he started to heal.

One evening he sat on the couch beside Jake. As a dog he was at least twice the size of the child. So he was often used as a pillow. He watched the TV enjoying the peace until a news broadcast came on.

"Mafia hit man, Niko is still missing today. Police are looking for any evidence leading to his arrest. Niko, was last seen fleeing Livermore Lab with an experimental weapon. He left one casualty, a security guard. The contents of the weapon have not been released. All citizens are to be alert and aware, this man is incredibly danger-"

The police began to be filtered out by barking. Jake started to pet him lightly whispering sshhhh to him, "It's ok Mafia, he can't hurt you, I promise I will protect you!" the young boy said with confidence. Mafia, was his new name given to him by Jake, after noticing since they got him every time they heard the report, he'd bark at the TV. Jake was the best owner anyone could ask for, cept, Niko wasn't a real dog and it felt so wrong using these people. He'd created a bond with this boy, when before he despised people.

After sometime Niko learned how to shift freely from human to dog. Which went well for awhile, until one day he started to shift. He hadn't noticed that Jake entered the room as he shifted. By the time Jake got wind of what was going on Niko was heading out the door, putting his gun into his pants. "MAFIA?" Jake shouted with a fearful voice. Niko stopped dead in his tracks.
"No kid, my name is Niko," He said in a heavy accented Italian voice.
"No, You are Mafia! You are my dog!" Jake raced to his leg and wrapped his arms around it not letting go.
"I don't care what you are, you are still my dog." He cried sobbing into Niko's slacks.

Niko froze thinking for a moment. Then he smiled lightly, using his metal arm he grabbed Jake from his leg and leaned down on one knee to speak to him.

"You are right, Jake, I am your dog but I have things to do, I promise I will be home before you wake up."
"Are you going to catch the bad guys?!"

A chill shot up Niko's spine and he bit his lip snickering at the kid, How naive. He smiled again kissing Jake on the head.
"Yes, I am going to catch the bad guys."

This is Mafia, He's my dog. He's also a superhero! 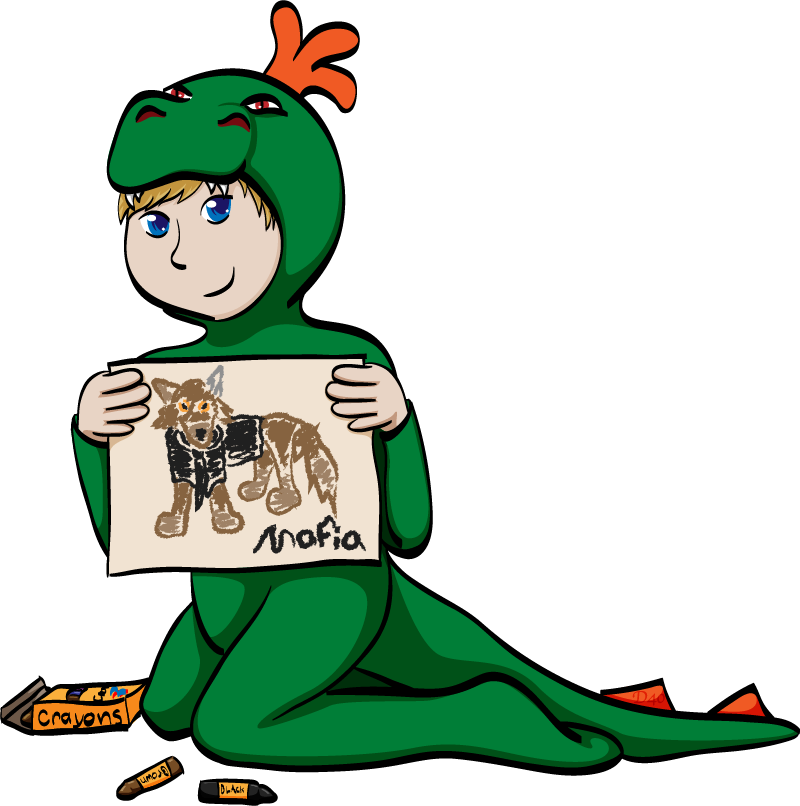