Ico has a minion! 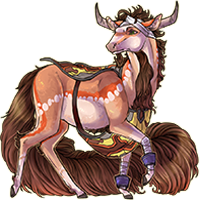 From the moment he was born, he was destined to die. Tiny knobs on Ico’s head stood as testament to the bad omens the village’s people had been led to believe for centuries. Anyone with such a defect was to be tossed away from the village in hopes of avoiding the wrath of beings greater than themselves. And that is exactly what happened to Ico.

A long, hard journey from the village to an abandoned fortress was one the village’s men knew all too well. Ico wasn’t the first of his kind, a boy born with horns, but the warning of what would happen should a boy like him survive drove the men on in their duty; to dispose of him. The fortress was but a shell of its once glorious stature. Stones crumbled and cracked as boots of the men tromped over, but they would not be dissuaded.

Within the bowels of the once proud fortress was the chambers in which every boy like Ico before had been shoved into, left to succumb to hunger and thirst and meet their destined fate. And just as the others before him, Ico too was imprisoned in the chambers before the men fled back to their village. Little did they know, Ico would not go quietly to his destined end.

The fortress shuttered and shifted, large chunks of stone and mortar diving from the ceiling and shattering on the floor. By chance, one struck the chamber that held Ico, breaking the bonds that held him in place and setting him free. Elated, the boy pushed forth from the rumble, intent on escaping and living out the life so many had been denied before him.

Wide-eyed, the boy rushed from the bowels of the fortress and up towards the light. But before he could escape, his vision shifted to find something unexpected. Someone else was trapped here, someone very different from himself. Dangling precariously above the stone chambers below, a girl, perhaps even an angel, was locked in a cage. Just like Ico, she’d been left here to die. The village’s people had thought Ico’s destiny was to die just as all the boys before him, but in that moment Ico knew his true fate was to live and set Yorda free.

♥️ Coding and story by

♥️ Story based on Ico