Cruelty has a minion! 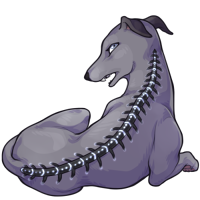 Coming into possession of additional subjects had proved difficult, however by luck, patient #6179 has been captured and will be retained for experimentation.

Currently, patient is sedated intravenously with propofol. Prior to sedation, patient was in distress and pain secondary to injuries sustained during containment. Once injuries are sufficiently healed, experimentation will commence.

Patient is female of an approximate age between 25 and 30 years of age, blue eyes, grey pelt weighing 132.7lbs and appears to be in relatively good health. No evidence of prior trauma evident upon further evaluation. It is the hope, given patient #6179’s good health, that the patient will tolerate experimentation to a greater level than her successors.

Patient #6179 is already showing promise. Mild abrasions, skin tears and strained tissues have healed in preparation for the first stage of experimentation. Today, patient underwent cardiac monitoring during stress test, pulmonary observation and vitals testing during various stages of activity. All vital signs appear stable and cardiac and pulmonary systems are sufficient to advance to the next step of experimentation.

One concern is the patient’s level of aggression. Despite mild sedatives being administered prior to testing, patient #6179 forcibly removed intravenous lines and electrodes during stress testing. A higher dose of sedative was administered, which appeared to hinder patient’s ability to fully participate in testing phase. Medical trials will begin tomorrow to determine best medicinal dose to reduce aggression without reducing patient’s ability to undergo the following phases of experimentation.

Medicinal trials delayed by one day as patient #6179 had severe bout of aggression during which the patient self-harmed along volar aspect of her left wrist. Fifteen internal sutures and seven external staples placed to close wound and patient placed under heavy sedation to reduce risk of repeated injury.

Patient stabilized today and readied for medicinal trials. Several doses of sedatives have been tested on patient and it appears a mixture of risperidone, citalopram and memantine reduces aggression without compromising patient’s performance. Further trials will be conducted prior to advancement in experimental phases.

Medical trials have been successful and patient #6179 has demonstrated reduced aggression while maintaining ability to participate in physically demanding activities. Patient prepped for next phase of experimentation.

Several internal nodes placed along patient’s spine and into multiple areas of the brain to manually stimulate nerves and differing lobes of the brain. Patient is recovering from anesthesia and vitals are being monitored as patient resumes medicinal regimen to maintain reduced aggression.

Patient #6179 has responded well to node placement and has fully recovered from placement procedure. Experimentation has moved to the next phase. Electrical signals pass through the implanted nodes to induce a motor response. With node implantation into the brain, it is the hope that the patient can be weaned from medicinal regimen and aggression can be controlled via electrical pulse to the amygdala and prefrontal cortex.

Motor trials have commenced. Patient placed in body sling over treadmill and electrical pulses stimulated gross motor movement of lower extremities. Trial has been successful, however patient grimaces in pain with electrical stimulation. Further medical evaluation will be completed to reduce pain in future trials.

A previous oversight has come to light during the motor trials. Although patient #6179 had been showing promising results during trials, the results are decidedly skewed. During motor trials three days prior, the patient was able to break from the body sling, overriding the electrical signals being sent via internal nodes, and remove herself from the trial. Patient #6179 attempted to self-harm again, but several team members were able to intervene and sedate the patient before she was successful in doing so.

It appears as though the patient’s body has accommodated to the previously lucrative medicinal regimen and patient now requires a higher dose. It also seems as though the implanted nodes have either shifted or are no longer viable. Additional testing will commence once patient’s medicine dosage has been altered.

Medical trials resumed after prior entry and new dosage has been administered to patient #6179. As of today, patient’s aggression appears to be under control once more.

Upon further inspection to previously placed nodes in spine and brain, and it appears as though they have been rendered unusable. Other methods to obtain success have been discussed by team members. Patient will be further assessed to determine physical viability of more invasive implant device to obtain desirable results.

Patient #6179 has been prepared for implantation. Today, patient will undergo extensive and invasive surgery. Surgery is anticipated to extend over 15 hours. Patient will be administered anesthesia and placed prone on the surgical table. Epidermis over the spine will be opened and posterior aspect of thoracic and lumbar vertebrae removed to reveal spinal cord. An incision will be made along the posterior dura mater, arachnoid mater and pia mater to reveal internal spinal cord.

Titanium implantation will commence at this time, individual nodes within the implant being placed along the dorsal spinal cord. The titanium implant will serve to replace removed portions of the vertebrae and offer a direct pathway to the motor, sensory and other pathways. If successful, patient #6179 will be fully controllable via remote access via titanium implant.

Surgery and implantation has been successful. Currently, patient #6179 is in recovery and vitals are being closely monitored. Patient will remain under heavy sedation until fully healed. Intravenous antibiotics have been administered as a preventative measure against infection and rejection of the implant.

Patient #6179 has survived implantation and is healing well. No signs of infection have been noted and the healing tissue appears healthy. The titanium implant remains affixed to the patient’s dorsal spine with new tissue healing around implant successfully.

Physically, patient #6179 has healed and has successfully resumed normal activity. However, patient appears to be experiencing emotional and mental distress. Despite continued medicinal regimen, patient has exhibited abnormal behaviors such as spontaneous muscle spasms resulting in what appears to be a ‘tic’. Patient has also been observed to be holding conversation with herself at times.

Although patient is not mentally stable, trials with new titanium implant will commence. Electrical impulses will be sent to stimulate implanted nodes along the spinal cord to determine which nodes produce the respective response to label nodes for future use.

Implant trials have commenced. Patient has difficulty tolerating electrical impulses, appearing to be in pain from minor pulses, particularly to the lower thoracic region. Patient also appears to have overactive gross motor responses to pulses, despite lowering voltage. Trials ceased briefly when patient screamed in pain and lost consciousness for several minutes. Once patient roused, trials commenced once more.

When trials commenced, voltage decreased to nodes and patient appeared to respond more appropriately to electrical pulses. Facial grimacing remains, however overactive motor responses and extreme pain have been remedied. Additional concerns in regards to gait patterns have surfaced. It appears the weight of the titanium implant has reduced patient’s balance which has resulted in patient shuffling, tripping and at times losing balance fully. Balance deficits may also be related to subsequent muscle atrophy secondary to time spent bedbound after implantation.

During continued motor trials, several unexplained events have occurred. One motor trial ended when the treadmill suddenly ceased to operate. Upon inspection, all electrical wiring and circuit boards were disabled, appearing as though a surge of electricity had rendered them useless.

Another motor trial terminated unexpectedly when the wires attached to the titanium implant ceased to function. With closer evaluation, wires were found to have overheated and melted.

From what can be discerned at this time, it appears patient #6179 has taken on some unexpected attributes. Further inspection warranted to discover explanation for these events.

Additional testing on patient #6179 has revealed the most unexpected results. Patient has been found to have the ability to harness electricity and expel it via her hands. It is the general consensus of the team that this is a direct result from the recently placed titanium implant.

The experiment team has been notified of these findings and compelled to take caution when handling the patient for future testing.

Tragedy. Although the experiment team took additional cautionary steps with patient #6179, today she has escaped, and not without consequence.

Eleven team members were subjected to high voltage shock from patient #6179 which ceased vital organ function before she fled. Prior to escape, the patient was cognizant enough to destroy all remote control devices previously synced to the titanium implant device.

All attempts to retain her have failed. Her whereabouts are currently unknown. Patient #6179 is highly dangerous and a threat to society… She must be stopped.

Cipher_326 for letting me adopt her!