Fireflies has a minion! 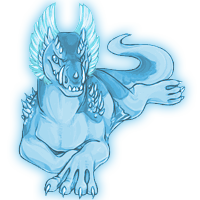 All beginnings have an end and all endings are new beginnings. Such was true when her attacker had started to pummel her as it was the beginning of her end. Over and over, fist met skull and soon her vision clouded to nothingness. Yet when she found herself spiraling into the darkness, heart slowing to a stop, breath ceasing, she could only think "This is the end."

Peace fell over her as death pulled her into its embrace and a warmth like nothing she had felt before enclosed around her. So this was it; the end of her existence. As death seemed to pull her deeper and deeper. Death was much more pleasant than the living could fathom. It felt like home. Darkness swirled around her, no light to be seen. Silence thrummed in her ears like the heartbeat of obscurity. Then, a sudden sound shattered the silence.

That voice... she was sure she recognized it.

"You are meant for acts much greater than this. Death will not take you. Not yet, daughter."

She hadn't heard her father's voice since the night he had died. The night the raids had started. He had been the chief's adviser and she, just a small scared child.

"Father... I do not see you." She replied, her voice cracking a little as she searched the darkness for a glimpse of him.

"And you will not, my dear. We are in different realms, you and I. You are still in the realm of the spirits, and I... well, crossed the threshold to the realm of the dead many years past. Wars rage across Senra now, daughter. Our people will lose against the growing threat. That is... unless you stop it."

She questioned, not knowing what she could possibly do to help. "I was defeated in battle... what can the dead do to help this war?"

"You are to return to the living world and become a link between the spiritual and living realms. Our ancestors must fight, but they can only do that through you. Powers long forgotten have awakened inside you. Now you must return, help our ancestors find worthy hosts to turn the tides of this war!"

Before another word could be uttered, the darkness fled and her vision returned. Blinking back the light, the sun winked through the canopy above, welcoming her home. Tenderly, she touched fingertips to her skull. Nothing. No pain, no blood, no wound. How is this possible? She'd been beaten near death yet no pain pulsed through her body.

Sitting up, she gently pulled herself to a stand now, surveying her surroundings. On the ground at her feet lay a body. Her body, but it was broken now. Her life blood had pooled around her and soaked into the ground. Legs and arms were posed in impossible angles. So this is what her father had meant. To become a link to the spiritual world, she had become a spirit herself. One that could freely roam this land.

As she thought about this, she could feel a pulse inside her. Not the pulse of blood being pushed through her veins. No, something much more potent. A power she could use to transform herself, teleport, and call forth the spirits of her ancestors to aid in winning this war that had washed upon their land. Senra, her homeland, called to her now. It cried out in pain, it begged for salvation. And she would be vessel through which Senra would achieve it.

♥ Images and story not for reproduction or reuse.