Mirina has a minion! 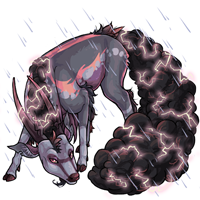 The scent of sulfur hung heavy in the air, stinging on every inhale. Craters dotted the Earth’s surface and ruins of skyscrapers cut across the horizon, remnants of a world long destroyed. Thick clouds of poisonous gas blotted out the sun, tinting the sky in a sickly hue. It had been decades now since the face of the world had been changed. Life had been altered forever and nobody knew why. The only thing that was apparent was everyone was too busy trying to survive to question why they were in this mess.

The future seemed bleak, an impossible dream for most. And while what little of the population left was hell bent on slitting each other's throats for scraps of meat, one was trying to preserve the past, and perhaps even revive it. Pilfering was commonplace now, honesty but a thing of the past so Mirina felt no remorse when it came to swiping up any novel or tome that her eyes fell upon. Every bit of text was a link to the past and a clue to what went so horribly wrong.

Books were not so easily found, though. Fires raged in a good part of the land, and where the fires had burnt out, nuclear waste or bands of mongrels had settled in. Small bonfires were stoked with the pages more often than not, many turning a blind eye to how precious such a find could be. Technology was hardly in existence anymore which meant what few books were left were the only remains of the society that existed before the world broke apart.

So Mirina had dedicated her life to saving these texts, hoarding them and reading each precious line in order to gain an understanding of what life was like before, and perhaps what it could be again. Many called it a fool’s quest, but she would not be dissuaded. There had to be something, some clue buried within the pages of the past to help restore life as it was. If there was, she would find it.

The hoard of books she’d gathered was impressive, and even more that her fingers had graced the corners of every page and eyes had scanned every word, but it still wasn’t enough. Some piece was missing. Rumors had started to circulate around the port that one of the pirate captains had pilfered a tome which held their salvation, one that spoke of the very device that had landed them here in this desolate, barren world. Curiosity peaked, Mirina set out into Echo.

Echo, one of the few operating ports still standing, was littered with crime, even more heavily than the other ports. The government, or at least what remained of it, had seemingly forgotten Echo existed at all which was a blessing and a curse. None had to shy away from the guards, but it also meant criminals ran rampant with no consequence to follow their actions. Today, that could bend in Mirina’s favor.

Ducking into the shadows of the battered buildings, Mirina pulled up her hood to mask herself. Anyone could be watching, but it was a risk she was willing to take. With the prize of a valuable, one-of-a-kind book guiding her, she slunk along the edges of Echo, making her way to the infamous pirate ship, The Oracle. It wasn’t as grand a sight as expected, but the ship was large enough to get lost within should Mirina lose her bearings. That was something she intended to avoid.

Eyes darting along the deck of the ship, watching the crew mull up and down the gangplank, Mirina waited and watched in silence. A tall figure emerged from the top deck, gliding down the stairs to meet the men there with shouting orders. A chill ran down her spine as her eyes slid down the bulky figure, seeing the prosthetic arm of the captain’s flexing and relaxing. Stories were whispered all through port of Captain Umar. He was fierce and fearless, ruthless with his crew. If ever there was a man to avoid, it was him. Still, the book called to her. She could feel it - it was worth something more than just a few coins.

Steeling herself, her eyes wandered down the decks again, watching as much of the crew now made for the gangplank, dispersing into the alleyways of Echo. Now was her chance. Leaping from the shadows, she kept herself out of sight as much as she could, running down the length of The Oracle, up the gangplank and onto the creaking decks of the ship. The deck was silent now, abandoned of all crew. Just a short flight of steps and a doorway, and she’d be within the captain’s quarters. Surely he kept his most prized possessions there?

Glancing around to ensure nobody was around, she bounded up the stairs two at a time, slipping into the doorway and silently shutting it behind her. Letting out a breath she hadn’t known she was holding, Mirina leaned back against the door for a moment, chest pumping up and down from the adrenaline in her veins.

Allotting herself only a brief moment of reprieve, she stepped forward into the quarters, looming over the desk the captain so obviously occupied often. Papers scattered the desk, ink well toppled over and several small books stacked the corners of the desk. Rifling through them, they were nothing of interest; ledgers of The Oracle’s inventory, letters from the captain’s past and his personal accounts of his past adventures. Surely this wasn’t all there was!

Pulling drawers out and emptying their contents yielded nothing but blank parchment and - a sharp clank to the floor stole her attention. A key! Smoothing the metal between her fingers, she knew this had to be what she needed in order to find the rumored text. Eyes darting over the desk, all the drawers were open but one. The last was locked tight. Fitting the key into the keyhole, a slight smirk played over her lips at the satisfying sound of the lock giving way when she turned the key.

Inside the drawer was exactly what she had been searching for. The book was worn around all corners, the cover decorated with hand-crafted leather designs that had seen better days. Running her fingertips along the curved corners, her breath caught at the creaking of a floor board.

Eyes widening, Mirina looked up slowly as the dreaded Captain Umar stepped from the shadows. What little light there was gleamed off the metal of his prosthetic limb, rumored to be so strong he could shatter bones without breaking a sweat.

”Ye only get one chance ta give it ‘ere and leave wit’ yer life,” he growled as he stepped closer, hand extended for her to place the tome into.

For a fleeting moment, she considered doing just that and forfeiting any information she could gather from the text in her hand. But before she could even think, her hooves were clanking over the wooden floor, fleeing for the doorway and towards her freedom. Such dreams were cut short when the metal closed around her arm, whipping her back around as her back slammed into the door. The heavy body of the captain sandwiched her against it, keeping her from moving, his heavy breath cascading over her face with a thick stench of ale.

”Yer gonna regret that,” he snarled, the metal of his prosthetic hand biting into her flesh. Without her giving much thought, she lifted her knee sharply, hitting him between the legs. It was good to know the steel of his arm seemed to be the only metal on the captain’s body as he keeled over in pain, giving her enough time to yank the door open and flee. Sharp calls for crew to tail her fell upon the deck, but none heard it. The crew had already vacated the ship in favor of the port and what it had to offer for comforts.

Mirina didn’t stop running until she was back to her own safe haven, chest heaving from the exertion. Fingertips bit into the soft leather of the tome as she unfastened the lock to her own dwelling, eyes searching her surroundings to make sure none had followed her. Slipping inside, she fastened the locks in haste before taking her most recent treasure to her own dilapidated desk.

Her eyes couldn’t move fast enough over the handwritten text, brows flexing in confusion. A ledger? She’d risked her life in order to obtain a simple list of inventory? Surely this was a mistake! Flipping through page after page, the text accounted for every bit of food, drink and supply of a ship long ago destroyed. Ears flattening, she couldn’t understand why this ledger was so important...

The last page held the answer, however, her eyes nearly skipping over a single word which made all the difference. “Pandora”. Brows lifting in surprise, she wasn’t sure exactly what the word meant, but it had to mean something. The text had been written in red and circled. Important… but for what reason? Rifling through her mind, Mirina could only make one connection; Pandora’s box. Certainly that couldn’t be it… could it?

For all the answers obtaining this ledger had brought, it’d only wrought more questions in her mind. This was the key to why the world was in such a state, but the details were nothing but a blur to her still. Somehow, she had to figure out what ship this ledger come from, and what the text referred to. Somehow… she had to find the answer to why the world was crumbling around her and how to stop it.

♥️ Character, story and coding by

♥️ Images and story not for reproduction or reuse

Parchment of the Fellowship

Black Book of the Undead

A Hole Too Deep