Arthas Menethil has a minion!

Invincible the Death Trot
As a child, Arthas Menethil was willful to say the least, finding his way to the Balnir Farmstead most days. Although he was a prince, born to the royal Menethil family that ruled in Lordaeron, he had no qualms about brushing shoulders with and befriending the common folk at the farmstead. He was more interested in the steeds and mares that galloped about the property, bred strong and hearty for the royal family.

During one of his visits, Arthas was fortunate enough to witness the birth of one such prized foal and was surprised to see the white-coated foal lay upon the ground, as it was traditional the Balnir’s stock have grey coats. Despite the foal’s difference, or perhaps because of, Arthas instantly felt a pull towards the gangly foal. And with permission of his father, he received the foal as a gift; a horse all his own. The foal’s shining white coat prompted thoughts of naming the beast “Snowfall” or Starlight”, but instead Arthas settled on a very non-traditional name: Invincible.

Arthas and Invincible were near inseparable from the time the foal was gifted and he made any and all excuse to spend more time at the stables to train his trusted steed. The boy even skipped his studies in favor of time with Invincible. Blizzards, rain storms, and political unrest; nothing could keep the two apart.

Time wore on as the two bonded, Arthas training Invincible to become his trusted steed. Soon a decade had passed and any moment that Arthas could steel away to the stables, he would. On a calm winter day, he did just that; he took Invincible from the stables, riding out into the wilds for a well-needed escape from the duties of a prince. Fate would have it a sudden blizzard would stir upon the lands, forcing Arthas and Invincible back towards the farmstead. Though the pair knew the path well, a patch of ice was all it took to throw the prince to the ground, knocking him unconscious and mortally injuring the steed. Shrill whickers poured from the steed’s throat as he trashed upon the ground, Arthas only feet away as he came back into awareness. Just one look at Invincible and the prince knew the steed was beyond healing; bones jutted at impossible angles from both front legs, blood freezing upon the patch of ice below them. The only choice was to put the steed out of his misery.

Arthas’ inability to heal Invincible lead to his decision to join the Knights of the Silver Hand that very year, determined to become a paladin and work diligently to gain all the healing powers he could. Whether because of his recent loss or his doubts of his own abilities, Arthas found himself nervous before the induction ceremony. The paladins spoke of a divine connection with the Holy Light, giving themselves selflessly over to the Light and remaining lawful and just with the use of their gained powers. A warning had been spoken to him to leave his angry and headstrong manners behind in favor of lawfulness and forgiveness.

As he stood surrounded by Knights of the Silver Hand, Arthas looked up to the bright sunbeams that leaked into the high windows of the Cathedral of Light. He felt nothing at first but the cool weight of regret settled in his stomach. And then a warmth like none other filled him, offering him peace of mind as the Holy Light bestowed upon him its sacred powers. He had become a paladin and found his place in the Silver Hand.

Though Arthas was faced with many challenges, thoughts of his struggle to put Invincible down were never far from his mind. Even as a the plague washed over Lordaeron, he found himself wishing Invincible was there to lead him in the right direction. Instead he tried to rely on the wisdom of his fellow paladins and other trusted advisors. Try as he might, his stubbornness always won out and he traveled down the paths his fellowship refused to follow.

As the plague ravaged the land, Arthas was diligent in seeking out the source of it in order to save his people from a fate worse than death. Shambling corpses occupied towns and farmland where once humans had, single-mindedly seeking out to destroy all that still held life. Soon it would be discovered a necromancer had spoiled the grains and shipped them out to the large villages in the surrounding area. In an effort to stop the destruction, Arthas rode hard to Stratholme, the center of the grain distribution, but was too late. Already the villagers had consumed the corrupted grains and would soon fall into the shambling corpses that had littered his journey there. He would not let that happen; instead he ordered the other paladins to slay the villagers where they stood before the sickness could overtake them. As he and his faithful paladins cut down the common folk, Arthas’ mind snapped. Despite his efforts in becoming a paladin, he’d been unable to save the villagers, just as he had been unable to save his trusted steed. What good was the Holy Light if he could not cure the plagued victims?

Arthas needed stronger powers to protect his people and he would sacrifice any and all to gain such powers. In an effort to do just that, he followed the necromancer’s minion into the frozen lands of Northrend where he learned of a legendary blade, Frostmourne. It was fabled to hold the magic of the once strong Lich King, Ner’zhul and Arthas would stop at nothing to gain such powers. Trudging through the snowy wastelands with several allies, he and his crew found the cave in which Frostmourne resided. Approaching the icy shield that encased the legendary weapon, Arthas proclaimed he wished to gain the powers at any cost; had he known the blade would answer with the deaths of his allies, he might have thought twice even with the promise of saving his villagers. But even as his allies fell to the icy ground, he took up Frostmourne to pay the true price of power. The blade took not only the lives of his allies, but it also stole his very soul, taking from him his connection with the Holy Light and giving him the power to control the ungainly cadavers that had resulted from the spoiled grain.

A voice resounded in Arthas’ mind, one unfamiliar to him, beckoning him forth on his darkened quest. While Arthas had wanted the powers to save his people, the voice now clouding his thoughts spoke of taking that which was not his. On his journey back home, the blade’s voice whispered of murder to take up the throne of Lordaeron for himself, ruling in his father’s place to protect the people from not only the looming threats, but themselves as well. Too weak of mind to fend off the voice’s call, Arthas did just that; he returned home, slaying his father upon the throne in cold blood.

Now armed with the powers of the blade, Arthas returned to the resting place of his faithful steed, Invincible. None, not even the voice, had willed him to return here, but somehow he knew now that he was rid of the Holy Light, he could have his steed once more. Thrusting Frostmourne into the ground, Arthas called Invincible forth from the grave. The ground crumbled and buckled as the steed’s remains pulled from the earth. Small patches of skin still stretched across the bare bones of the once pearl white steed, but Arthas saw nothing but the white foal that had been birthed so many years ago. All that mattered was he now wielded the powers he had sought all along.

I saw you being born. I helped you come into this world, and I helped you leave it… and now by my hand, you are reborn.

Story based on World of Warcraft lore

Quote from Arthas: Rise of the Lich King by Christie Golden 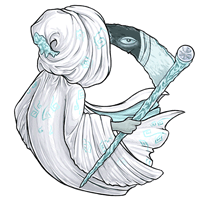 By User not found: dyabolik_wing

Shard of the Everlasting Ice Castle