Barry has a minion! 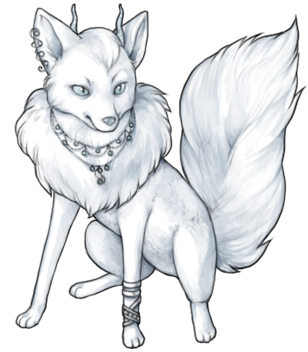 you might be wondering to yourself:
so how does an art student become a monster hunter?
well. it involves a train, a cute guy,

Love seeketh only self to please,
To bind another to its delight,
Joys in another’s loss of ease,
And builds a Hell in Heaven’s despite.

the story of which you are about to partake in, dear reader, is not one of a good man. in fact, i would be as bold as to say that it's a story of a selfish man.

a man who only looked after his own heart, who always cared about nothing more than his desires. we are talking about a man, dear reader, who left behind a string of broken hearts and continuously used people in order to get his way.

this man, this wretched and despicable man, is me.

my name is barry garner-- and i'd be lying if i said i was always a remorseful person. i knew what i was doing this entire time. i knew the effect that toying with everyone would do to them and i did it anyway.

so why am i here, writing all my idiocracies on in a journal?
dear reader, i think i just fell in love.

[ plot notes mayhaps?
barsen, barry / all the boys that came before, ro-ro-robarry, art block, train ride choo choo, meeting cris who is honestly liek a greek god u ever met a hotter oc because uHHHHHH, murderville express, lots of clues n gay bonding, lol i aint in love (who u think u kiddin ho), dance scene to end all dance scenes, fck ok so i may be a lil in love lol, tryin to distance himself but u know cris hes like a romantic, them exchanging a kis s, solvin the murder, "oh ya im a monster hunter btw we cant be together" "its ok cus ur literally too good for me anyways" "ok that aint true lets send letters", them leaving each other, sendin letters being gay, barry realizes he cant be without his boo, joins him on his job or whatever idk this second half we aint there yet cus im bad at replying ha ]

RELATIONSHIP — never in a million years, did i think my life would end up like this. my love, i wouldn't have it any other way.

{ }
p l a y l i s t
---
no tears left to cry by ariana grande
house of memories by panic! at the disco
all that glitters by earl
shame by matchbox twenty

background edited by me by subtlepatterns.

Staying Friendly After a Breakup Cristofer
...ha. i'm not sure what i ever did to deserve you, but am i grateful. Kevin
ha, i wasn't going to stay in this town forever. none of us were.

Adam
i'm only back for a short while, but i'm happy to see you. Mitchel
you're too nice. people could take advantage. Noah
(extends hand) i wish you the best in your future endeavors. Eric
that's rich. ever think that maybe you're the one who doesn't deserve one?

President
you weren't even in my top ten lays, mr. suit.