Stoned has a minion! 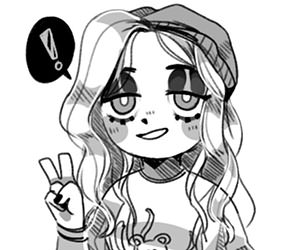 chloe likes to spend her days tagging up walls and getting high as a kite. she also enters art exhibits and skateboard tournaments. her parents aren't really pleased with their daughter running rampant in the streets. every time they see her, she has a new hair color (this time its silver)! she dropped out of college, turning her attention to her artistic work full time. her parents just shook their heads, and probably decided to write her out of the will at that moment. either way, she survives off a patron and the commissions she gets from the city or businesses.

APPEARANCE — chloe is 5'6, but her boots always give her an extra inch or two. her hair, which she keeps chest-length, never stays a single color for too long. at the moment, it's silver. (her next color will probably be a bright teal). despite all of the dye jobs, her hair is pretty healthy. she has dark brown eyes, and uses contacts since her vision is kinda crappy. her style is very skater-esque, often seen wearing beanies, jackets, and graphic tees. ( fc )

PERSONALITY — chloe's house is known as a safe haven for her large amount of friends (and even strangers). need somewhere to crash? she's got your back. need someone to vent to? chloe's your gal. she never asks for repayment, because she doesn't mind. it's not a bother to be a good person. she's not the kind of person to turn a blind eye to someone in need. outgoing as hell, it's hard to find her alone. she usually has one friend or another next to her side. she's incredibly easygoing, and it's hard to make her angry. chloe can be extremely indecisive- it takes her a while to ponder all of the possibilities. she's an incredible artist, preferring to draw more abstractly. all of this might be because she's also stoned out of her mind 92% of the time. completely unashamed of her sexuality, she's been known to yell out: "I'M GAY" instead of giving a proper answer to something.

FUN FACT once broke her arm and didn't realize until someone pointed it out.

The city is my church. It wraps me in its blinding twilight.

2. don't stop (color on the walls) - foster the people

Crayon on the walls, Color on the wall. I'll draw until I've broken every law.

Don't know you super well, But I think that you might be the same as me. Matthew
woah, colomar. am i high or do you suddenly have three dogs.

Finn
hey, you better make it to our next outin'! Burnt
what, you always deal and run?? smoke with me! Adam
heyy, your boyfriend's over here. come in!