Borneo has a minion!

Orangutan
orang·utan | noun | 'man of the forest' in Malay.

By the Numbers
Only a decade ago these shy great apes had 230,000 individuals living throughout Southeast Asia. While the exact population is hard to come by, wildlife biologists place today's number of wild orangutans somewhere in the ballpark of 50,000 -100,000 individuals. Both the Bornean and Sumatran orangutans are listed as Critically Endangered by the WWF. This estimate comes with the fact that 2,000 - 3,000 orangutans are killed every year. At this rate of loss, many experts believe that the orangutan will be extinct in the wild in less than 50 years.

Palm Oil
Due to intense deforestation orangutans have seen an 80% reduction of their habitat in the last 20 years alone. One of the main causes of habitat loss for the orangutan is the palm oil trade - over 6 million hectares of land in Indonesia is stripped of trees to produce the crop. Since orangutans rarely leave their leafy homes, it is critically important to preserve the forest habitat of Southeast Asia. While it's understandable that the need for palm oil is growing, a skewed supply-demand ratio has led to the illegal farming of palm oil for use in food, cosmetics, and cleaning supplies. The slash-and-burn methods used by farmers to clear hectares of rainforest cause severe air pollution (up to 15-20 million tons of carbon dioxide emission per day), which negatively affects Asia's only great ape severely.

Poachers and the Pet Trade
Smuggling is also a serious threat to orangutan populations; nearly 1,000 infant apes are illegally taken from Indonesia each year for the exotic pet trade... usually resulting in the death of their mothers. Illegal hunting is less of a problem, but since provincial governments are often lax on punishment many red apes are killed for food or sport. Orangutans are also killed in defense of plantations - due to their habitat loss the animals will descend from their trees to find food in other places... such as developed farmland.

How Can I Help?

-Donate to a conservancy or foundation of your choice. Possibly the fastest and most convenient option!

-Adopt an orangutan symbolically. The WWF offers such a program to symbolically adopt an animal. Most of these symbolic adoptions come with physical gifts such as stuffed animals, photos, and certificates.

-Foster an Orangutan by providing a year's worth of care for an animal in a conservatory or sanctuary. Fostering helps pay for medical and food expenses the orangutan might need during rehabilitation. These donations are tax-deductible.

-Buy FSC-certified wood and paper products. Say no to Paseo and Livi paper products, which are made with materials from Asia Pulp & Paper... a company responsible for the majority of deforestation in Southeast Asia.

-Avoid products with palm oil, or switch to products that pledge to use sustainable palm oil.

-Spread the Word! Even talking to a single person about the orangutan's plight raises awareness. Make it a point to educate and spread awareness of the issues facing Asia's great ape and their rainforest home. 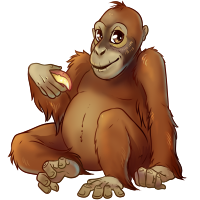