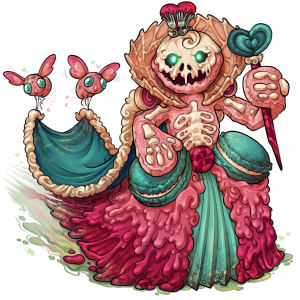 Elsie collapses to the ground as whatever force had a hold of her releases its grip. Elsie looks from the rolling pin in her hands to you with horror in her eyes. She quickly tosses the weapon away and hugs her knees to her chest.

You aren’t sure what to do at this point except offer some comfort. At the very least, she doesn’t seem to be injured. At least, not anymore than normal for an Unliving.

Remembering something, Elsie leaps up and takes you by the hand, leading you to the entrance of her bakery. She starts grimacing and motioning urgently towards it. At that moment, a loud clanging rings out from somewhere in the thick oven smoke and a Possessed Cookie Spatula lands at your feet.

Um, she is fantastic! *.* Please make more wearables based on her!
1

Who else is buying this just for the wearable skin
1

Her dress would be a terrific wearable.
1

The loot is so cute. MUST GET SWEETYFLY!
0

wish i had a sweetyfly cape in real
1

This is a gorgeous opponent!!
0

So all these Cash Shop challenger items this year are going to be "wearable" skins (as in items that cover your HA rather than be unlocked as skins)?

Also, it's alright Elsie, sometimes being angry makes people do things they regret.
0

Omg the overlay is GORGEOUS :heart_eyes:
0

Waiting for survival opponents, that's the only survival achievement I don't have. Also I miss Stargazer and Item hunt. Hope they reappear some day.
1

I'm going to throw my vote in for wearables based off this queens clothing. Bonus if they come in recolors, but really I JUST WANT IT.
Let me be a beautiful icing coated skeleton cookie.
5

Now that was a fun battle. Now I want to buy one to wear.
0

SHE HAS BEEN THROUGH ENOUGH
0

@Zombie_Slayer
You need to unlock her by going to the item in your inventory and clicking the link. You lose the item when unlocking the challenger.
1

I hope that the big bad of all of this gets incorporated into some sort of plot this year! :D That'd be AWESOME!
1

How do you get her as a challenger
0

Bought it just to have it as a wearable lol
3

I actually said "whoa" when that sweetydeadqueen loaded. That challenger is a true visual treat! Major props to whoever designed her! (loving the little bugs too!) :D

I know this isn't a plot, but I'm rather enjoying this year's little bits of story while getting more challengers~ My current theory for whatever this is that's "speaking" in the item descriptions has been the allegedly powerful god who apparently created the Blackheart Hollow. Control and manipulation seems to be his thing & it'd be fun to expand a bit on that lore .
8

She is so beautiful! I love her outfit to pieces and I wish it was wearable!
2

Oh I want a sweety dead land in Subeta. I love this!!
0

Please tell me that the skirt is a wearable item, I will buy that spatula and wait until my pet is strong enough to beat that cookie if it means I get to wear that skirt eventually. It's gorgeous.

And considering the summoning item description... its interesting how Elsie didn't fight the possession once she found out what the person's plans were. I'd consider Ecks but I don't think she'd address a fellow Unliving so detachedly. More importantly, rage seems to be a big factor in letting whoever this is possess people. Makes me wonder what made Vanya mad enough to fall prey to this person and who they plan on controlling next...
3

Oh gosh, what if this all cumulates to the spirit possessing Bubbles and he remembers being killed by Gunter
4

hey just wondering but when does the cash shop rewards card change again?
1

That challenger art is amazing :heart_eyes:
1

Wow wow wow, all of this is amazing! The challenger, the summoning item wearable, I love the art! :o
1

I love how these items are literally skins, they are awesome
1

I was thinking the same thing!

Should we put it in the suggestion box for next year?
0

That would have been a cute skin too!
3

Comments are currently on a short cache, meaning your comment may take a few minutes to show up after you post it.