Dean Winchester has a minion! 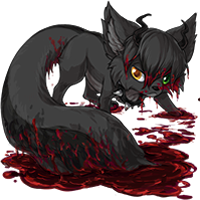 Dean Winchester is:
Based off of Supernatural
Created by Eric Kripke
Owned by Warner Bros. TV
The End of the Beginning

His hands gripped the edges of the porcelain sink. He took a deep breath to steady himself then slowly raised his head to look at his reflection. There they were, eyes like two black pools, the thing he had feared the most. He clenched his jaw, fingers flexing, leaving dents in the sink, and he let out a roar of denial, shoving away from the monster in the mirror.

“No! It’s done Sam. There is no fixing this,” he mumbled as he dropped to the ground at the edge of the trap. He listened to the crunch of Sam’s boots on the gravel, the car door open and close, and the engine start. Closing his eyes, suddenly moist knowing this was really it, the last time he would see Sam again. He let out the breath he’d been holding as the car pulled away, heading down the driveway. Waiting until he couldn’t hear it anymore, getting ready to stand and go back into the small house surrounded by the field and the massive devil’s trap, he stopped at the sound of footsteps coming toward him.

“Dean,” the voice wasn’t Sam’s, and Dean swallowed his next words back in complete disbelief. His eyes still fixed on the ground, he saw when Cas reached the edge of the circle, scuffed shoes right against the line, familiar trench coat swirling over it as it settled.

“Cas, what the hell are you doing here?”

“I’ve been trying to find a cure, something that wouldn’t kill Sam. I’m sorry Dean, I failed.”

He knew that already, had given up the last vestiges of hope when he listened to Sam drive away. Dean went to stand and tell Cas exactly that when everything changed. Cas stepped over the line and into the trap with him.

“Cas what are you doing? Get out before I forget who I am again.” He watched as Cas slowly sank down to his knees, dead grass crackling beneath him.

“No damn it, just go Cas.” Instead, Cas just sighed and cupped Dean’s face in his hands, slowly tilting it up. Dean clenched his eyes shut, still ashamed of what his friend would see.

“Fine,” Dean replied through his clenched jaw. He took a deep breath and defiantly opened his eyes, and what he saw looking back at him made his jaw drop.

“My grace burned out Dean, and I stopped looking for more.”

“I thought you might not,” Cas sighed. Then he leaned forward and pressed his lips softly against Dean’s, hoping he would finally get the message. When Dean’s hands came up to touch the sides of his face, Cas smiled a little against his mouth, happy he didn’t have to explain. When they pulled apart, Cas stood, offering Dean his hand.

“What happens now?” Dean asked him.

Cas’ mouth turned up in a half smile and he answered. “How do you feel about bees?”

Fade of the Warrior

Hooded Jacket of the Moose Hunter

Gift from the Pizza Man

How to Use a Shield

How to Kill a Zombie Edition 1

How to Kill a Zombie Edition 2

The Flaming Book of Flaming

Nightmarish Fangs
The Evil That Is... Maliss

How to Prepare Eyes

Dead Beats: From the Grave

Memoirs of a Ghostly

The Beauty of Graveyards

The Ghost at the Door

Half of a Tombstone

Delicious Bugs And Where To Find Them

Saga of the Trickster

UR Not The Father Conversation Heart Beanbag

How to Write I

Bow-Legged Book of the West

Memory from a Happy Summer

Not A Gym Bag

So Your Baby is Infected

Your Pickle Could Get You in a Pickle

How to Improve Your Memory

Beers of the World

Getting Drunk With Style

Velvet Whiskey with a Blue Bag

Velvet Whiskey with a Gray Bag

Velvet Whiskey with a Lime Bag

Velvet Whiskey with an Orange Bag

Velvet Whiskey with a Pink Bag

Velvet Whiskey with a Purple Bag

Velvet Whiskey with a Red Bag

Velvet Whiskey with a Teal Bag

Velvet Whiskey with a White Bag

Velvet Whiskey with a Yellow Bag

How to Make Pie

Blueberry Pie Slice on a Stick

Cherry Pie Slice on a Stick

Rainbow Pie of Everything Wondrous Castiel
Baby in a Trenchcoat