Sistine has a minion!

the ♀ graveyard lain
owner: robin
the punisher
Sistine is the PRESIDING REGENT OF HELL while her father is away with THE MEASLES (yes, the king of hell gets sick too). Though she is deemed 'THE PUNISHER' (for good reason), Sistine has found her job extremely unfavorable and would rather inhabit the mortal realm with her HENCHMAN, Mr. Fluff, and live like a "NORMAL HUMAN" (her words).

the interview
Today is a very special day for The Punisher. She has her first job interview! Sistine applied to Baby Animals R Us under the very covert pseudonym SKYLER D'INFERNUM two months ago, but the internet connection in hell is terrible, so her application didn't go through for weeks. However, her much anticipated day has arrived, and she must make the journey up the 1000 flight staircase to the human realm (she calls it 'The Glute Punisher,' likely an homage to herself).

While she is away, Sistine has entrusted the responsibility of torturing the most wicked of deceased miscreants to her second-in-command, Mr. Puggle. Mr. Puggle is a giant (and slightly overweight) three-headed pug. He is very responsible. He has even volunteered to take over Sistine's responsibilities in Hell if she procures a job in the human realm. He is a good friend.

Today, Sistine has taken the guise of an AVERAGE HUMAN MALE because she accidentally put too many raven beaks in her transformation potion. (She resolves to fix this problem by using her powers of manipulation to make the interviewer believe that she originally put 'male' on her application. Tampering with the interview in any other way is, however, strictly south of her moral compass. She very much wants to earn her job.) Nonetheless, all is well with Sistine, and she currently traipses through the clogged streets of New York City while muttering to her henchman about the problem of POLLUTION. When she is sure no humans are watching, she inauspiciously POOFS AWAY some of the garbage littering the sidewalks.

Finally, Sistine and Mr. Fluff reach Baby Animals R Us. Sistine has become too excited and must concentrate to make sure that her excitement doesn't cause the ground to rumble and crack where she walks (this often happens when she is angry, but rarely when she is very excited). Mr. Fluff, who has taken on the guise of a trusty (and, of course, fluffy) labrador retriever, encourages her to go inside and meet her interviewer while he waits outside for her patiently.

Inside, Sistine is greeted by her favorite sound of all of the realms -- THE CLAMORING OF TINY BABY ANIMALS. Her delight is quite tangible. A door opens and the woman she presumes to be her interviewer walks out to greet her. Sistine smiles happily, and the two disappear into the interview room together.

"Today you are you! That is truer than true! There is no one alive who is you-er than you!" -Dr. Seuss

Only you can determine who you are going to be. 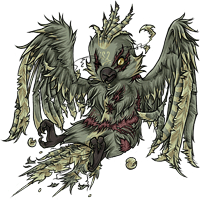 credits
thank you to everyone who helped me with this pet! ♡
+ beautiful art by avici
+ profile and story by me
+ wing brush by C4ligo @ 123freebrushes
+ scrollbar code from here
+ tc help from ache and grouse
+ thank you to amber, hare, athene, and sentinel for checking the layout!

Impaling Boot of the Maw