Daphne has a minion!

another brainchild of robin
story
about
credit
sweet escape
One week had passed since Cindy packed up her stuff and left. The divorce papers were still on the counter, crinkled from the salt of my tears.

It had been a rough week. All I wanted to do was drink my tea, take some more NyQuil, and crawl back in bed.

"Hey, isn't this your wife's cup?" a little voice squeaked up at me.

I looked down at my cup of chamomile, alarmed. A tiny pile of clothes was folded neatly beside it, and a little woman lounged in my cup, a bemused expression on her face. I wondered when she got there.

"Ex-wife, I think you mean," I said drearily. I looked outside. It was raining again.

She giggled, swimming up to the edge of the cup nearest me. Drink me, the cup said.

"Rich, right?" she said, cupping her face in her hands and smiling at me sweetly. Her pointed teeth were shiny and white.

"That's me," I said, unsure what else I could possibly say.

"I've been watching you, Rich," she said. "I can't believe Cindy left you here all alone. What a total hag."

I looked down at her quizzically. Watching me? She twirled her hair around her finger and made a pouty face, sticking her tongue out at me.

The tiny woman in my cup rolled her eyes. "Oh Rich, why do you have to spoil the fun?"

I didn't respond. I wasn't sure what kind of fun we were supposed to be having, me and this little woman in my tea. I cleared my throat.

She shrugged. "Well, first of all, my name is Harriet. I know you, so you don't have to introduce yourself." She grinned at me, as if she were laughing at some kind of inside joke. "What am I? I'm a sprite, fairy, pixie. Whatever you want to call me. You know the type." She took her little fingers out of her tea-bath and splashed me with tea, winking.

I wiped chamomile off my lip and shook my head. Maybe I'd taken too much NyQuil? What are the side effects of that stuff, anyway? Were hallucinations one of them? I'd have to lay off it for a while. Find some other way to numb the pain.

She continued yammering on. She laid flat on her back and floated for a while, looking up at the ceiling silently. Then she started again. "You might not believe me, Rich, but everyone has one in their house. One of me, I mean." She paused to adjust herself and peek at me over the lip of the cup. "We aren't supposed to talk to humans, but, oh, Rich--I just couldn't help myself. You're such a hunk. I'd break the rules for you any day." She was blushing, her cheeks bright red.

I felt my cheeks flush. Seriously, Rich? I pushed the cup of tea away from me and she slumped down into her tea-bath, annoyed.

I put my face into my hands and rubbed my eyes. What was this? Stress? I couldn't believe there was a minuscule talking woman in my tea. I really needed to get out of the house.

I missed Cindy. Sorely. The patter of rain on the roof reminded me of lazy Sunday mornings in with her. Pancakes. Orange juice. Movies all day.

"Rich," she said urgently, standing up suddenly to grasp my thumb, which was now resting on the handle of the cup. "You're not thinking of her, are you?" Tea fell lazily from the ends of her long hair back into the cup. I averted my eyes, then pried her little hands off my finger and pushed the cup far enough away that I was out of her arm's reach. (It wasn't very far.)

She slumped back into the tea, sloshing droplets all over the counter, and crossed her arms, slowly sinking until half of her face was covered. She blew bubbles into her tea-bath unhappily.

She sat up. "You know she was cheating on you, right?" she said suddenly. She had a mustache of tea on her upper lip and her hair was soaked.

"Yeah." She said. She rolled her eyes. "Human women, right?"

She got out of the water without the slightest shame, and I looked away. "You're getting tea all over the counter, you know," I said.

She ignored me. "Like I said, everyone has a sprite in their house. I was assigned here. We aren't supposed to break the rules or talk to anyone. We're just supposed to watch and to listen for signs of the Goblin Uprising. But I told you. I'd break the rules for you. I think you deserve to know, anyway."

The Goblin Uprising? What the hell was she on about?

She crossed her arms and raised her eyebrow. "You really don't have a clue about Cindy, do you? Human women are seriously the pits."

I was in shock. I had the sudden urge to hurl the teacup at the wall. Throw me. I glanced at her.

She pointed a tiny finger at me. "Don't even think about it."

She leaned over the teacup and picked up a tiny towel. She patted herself dry, then wrapped her hair in the towel and twisted it so it sat atop her head like a little beehive. Then she grasped the edge of the teacup and (teetering slightly) stepped out of it, starkly naked, glaring at me with her hands on her hips.

"Can you put some clothes on?" I said, my voice hoarse.

"Um, that's what I'm doing." She said. She unfolded the pile of clothes next to the teacup and began pulling on pants that looked to be made of leaves. She left little tea droplets all over the counter.

"Your beloved Cindy was screwing Jeremiah from accounting," she said bluntly, buttoning up a leaf-shirt. "Or so I heard."

My voice caught in my throat. Jeremiah from accounting? The one Cindy went on the work retreat with? The one that had called her just last month while we were at dinner? I should have known better.

"I told you," Harriet said. "I'm here to listen. And wow, I've heard some shit. I'll spare you all the gory details, though."

I didn't want to know anyway.

She began gathering her things (which mostly seemed to consist of weapons and other tools made of twigs), the beehive-towel teetering atop her head. She pulled on small shoes and, suddenly, a pair of wings which I had previously not noticed began buzzing. "Gotta dry these babies off for a sec before I go," she said, holding the towel in her arms. "Otherwise I would fall right out of the sky."

She began to rise off of the counter, and I stood up. "Where are you going?" I asked, suddenly feeling very alone.

She came near, and hovered near my shoulder.

"One more thing," said the little voice by my ear. "Sprites mate for life."

The buzzing of wings disappeared somewhere to my left. I didn't see her go, just a faint glimmering in the air that she left behind.

I sat down, my head spinning, and took a sip of my tea.

There was a strange tingling in my limbs, and suddenly, the world around me seemed to grow very, very large.
about me 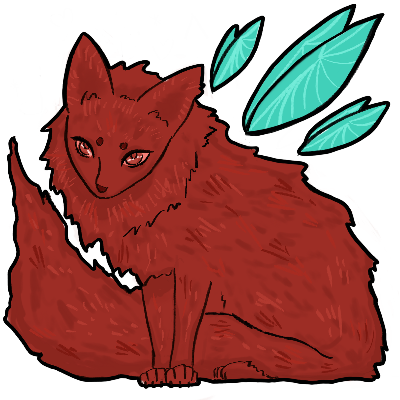 pixie naming conventions
Common house pixies all follow the same naming convention. The surname comes first, and is a maternal family name passed down each generation. House pixies take their names after the plants that they tend. Harriet's family tends mint, lending her the name Mentha. The given name comes second. Pixie given names often overlap with humans as they share much of the same culture. The third name is the month in which the pixies are born.