Jiangsu has a minion!

helix (get yours here);
Free background from Wallpapers.Net;
Overlay by

This is a metaphor, please don't go pushing cows
(or any living being if that matters) down cliffs.

PUSH THAT COW DOWN THE CLIFF!
The lesson cow tale. 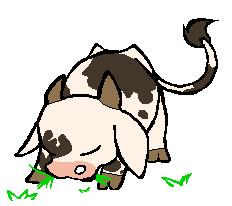 A long time ago, a Monk set out on his travels accompanied by his assistant, a Brother. Night was falling when the Monk told the Brother to go on ahead to find lodging. The Brother searched the deserted landscape until he found a humble shack, in the middle of nowhere. A poor family lived in the hovel. The mother, father and children were dressed in rags. The Brother asked if he and the Monk could spend the night in their dwelling. “You are most welcome to spend the night,” said the father of the family. They prepared a simple meal consisting of fresh milk, cheese and cream for the Brother and the Monk. The Brother felt moved by their poverty and even more by their simple generosity.

When they finished eating, the Monk asked them how they managed to survive in such a poor place, so far away from the nearest neighbors and town. The wife looked to her husband to answer. In a resigned tone of voice he told them how they managed to survive. "We have one cow. We sell her milk to our neighbors who do not live too far away. We hold back enough for our needs and to make some cheese and cream. That is what we eat.”

With a heavy heart, the Brother returned to the hovel. He worried about the future of the family because he knew they depended on the cow to survive. His vow of obedience bound him to follow the orders of the wise Monk. He pushed the cow off the cliff. 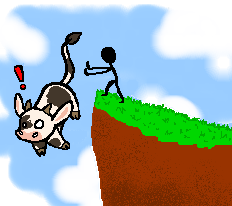 Years later, the young Brother became a Monk. One day he found himself on the same road where he found lodging so many years ago. Driven by a sense of remorse he decided to visit the family. He rounded the curve in the road and to his surprise, he saw a splendid mansion, surrounded by landscaped gardens, in the place where the hovel used to be. The new house exuded a sense of prosperity and happiness. The Monk knocked on the door.

A well-dressed man answered. The Monk asked, “What ever became of the family who used to live here? Did they sell the property to you?” The man looked surprised and said he and his family had always lived on the property. The Monk told him how he had stayed in a hovel on the same spot, with his master the old Monk. "What happened to the family that lived here?”, he asked.

The man invited the Monk to stay with him as his guest. While they ate, the host explained how the family’s fortune changed. “You know, Father, we used to have a cow. She kept us alive. We didn’t own anything else. One day she fell down the cliff and died. To survive, we had to start doing other things, develop skills we did not even know we had. We were forced to come up with new ways of doing things. It was the best thing that ever happened to us! We are now much better off than before.”

I used to have a cow in my life. Its name was anxiety. I'd hold tight to it whenever change was facing me, afraid to change my life. But the way I was living made me unhappy, I was anxious and afraid about my future, I kept jumping from job to job and my insecurity'd speak louder than my heart. My skin was breaking and acne took control over me. I'd eat my anxiety away, too, in hopes it'd be quiet.
Changing is difficult, I know very well. Leaving your comfort zone is a massive impact to your mental, spiritual and physical health. It's a page you are turning over and to which you'll never go back. But I did it. And if the little awkward me managed to do it, I believe others will succeed aswell.
I pushed my fear down the cliff. Of course, the butterflies in my stomach were still there for me. But I managed to throw away

What about you, my fellow reader; do you have a cow in your life? What's its name? Remeber, comfort is the enemy of progress and good is the adversary of the best. Never restrict yourself, trust your gut, point to the direction you want to go and just GO.

Some say the sky is the limit. But for someone as powerful as yourself, is it really?

(Source/author of the fable is unknown!)