Hakkar has a minion! 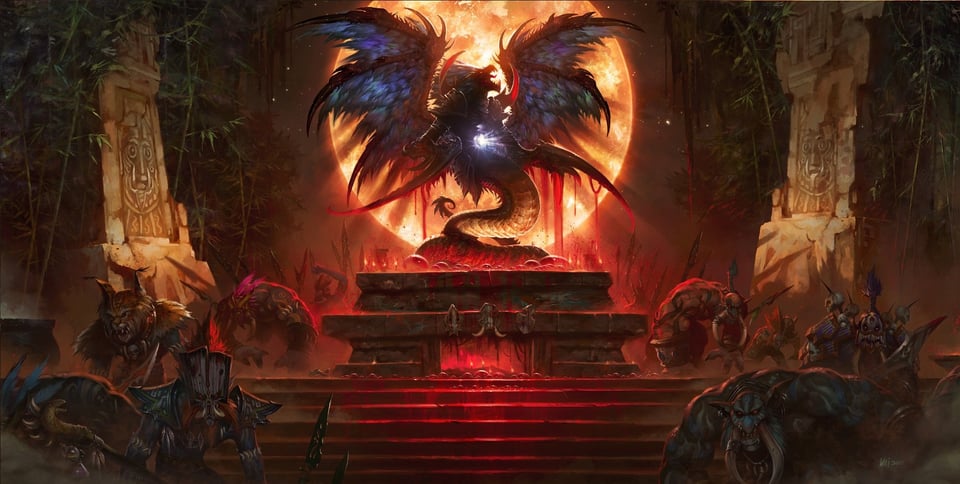 Extra Credit:
Hakkar is quite possibly one of the most well-known bosses from Vanilla World of WarCraft, namely for a bug which eventually resulted in a scientific study on how diseases are spread. Hakkar's boss fight included a part of the fight where he would disperse a green cloud of poison which gave the players the infamous debuff, Corrupted Blood. Once the players were infected Hakkar would then cast a blood draining spell that would take the Corrupted Blood debuff and damage him. The bug happened when hunter and warlock pets got the Corrupted Blood, however Hakkar never targeted them so the debuff became permanent when they were dismissed from battle. Not to mention Corrupted Blood could never leave the dungeon on a player, only by way of pets.

The player who had the infected pet could then release the debuff within city limits by calling their infected pet. On my server, Silvermoon, it plagued both Orgrimmar (for an hour and forty-five minutes) and Stormwind (time unknown but incident confirmed) and could be spread via NPCs. The NPCs could not actually die from debuffs like this, but they could spread it to other nearby players. Corrupted Blood leaped to nearby players from infected players and/or NPCs and spread, killing low-level characters instantly if not within one-to-two ticks (the debuff caused 292 damage, which was pretty massive in Vanilla) and resulted in people banding together to heal each other or abandon the city until the debuff eventually died down. The epidemic lasted so long that Blizzard eventually shut down and restarted all servers while putting in a hotfix that prevented hunter and warlock pets from carrying the debuff out of the raid, the only place the debuff was supposed to be.

Another fun fact is that there are two Hakkars in WarCraft lore, but they are two separate entities. There was a Hakkar the Houndmaster, who works for the Legion, and was the first Hakkar to appear in WarCraft lore. The creator of our snake friend was trying to think of what to name him when the name Hakkar came to mind, having forgotten when he was told about Hakkar the Houndmaster. Thus, Hakkar the Soulflayer was born and is not to be confused with the Legion's Hakkar.