"The darkness comes out of her shell,
Yet another cold night in hell with all the pain;
The dying light is losing its glow
And my last glimmer of hope now fades away..." 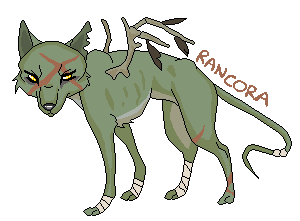 Another feather to fall, and now her right wing was completely naked, pure bones. She knew she had little time before she was completely brainwashed.

Cora had made a promise years back, when she was still alive and the big purge had just started. A mass erradication to supress any and all forms of infection that were taking over in bigger dimensions than it was thought to be possible. She was a simple Montre back then, working at the library where she would get herself lost in poetry books from time to time, wandering about the rich minds of the poets and the all the possible meanings to this or that poem, to at the end of the day get home to her mother and the most precious little Montre girl ever: her daughter.
It was one of those terrible, terrible nights where everything goes exactly as it is expected of them. She had just locked the doors of the library, night had recently spread its dark blanket over the sky and as usual she held a couple of books tight in her arms — just a little thing to read before sleep — when a loud growl happened.

She woke up at a hospital, dizzy and sore, to the gigantic eyes of her daughter so close by her side. "Mom? Oh she's awake, nana! She's awake!" She remembers all the hugging and the soothing voice of her mother telling her everything would be alright. But as if they were timed, just waiting to hear the elderly's words, three plague doctors entered the room they girls were. While one of them was checking on Cora's parameters, other was taking the child away to the grandmother and bringing them with him to the outside of the room. There was the last one, standing by her side mumbling whatever words those were, but Cora's attention was to the parting of the two who were all that mattered to her.
She later found out she was sick. What happened was an attack when leaving the library, by an infected citizen. She had some scars on her left leg, and her head was hurting too. "But we are working on an antidote. We can heal you, just be patient."
Cora was patient. She was the most patient Montre in life, or at least until her child and mother were taken from her. "It is not safe for them", they would say. "A couple more days and you will be back to them", they would lie. She knew in her guts that it wasn't that simple as they were painting it. She suspected she and the other patients were not there to be treated at all — they were the experiments they were testing on. 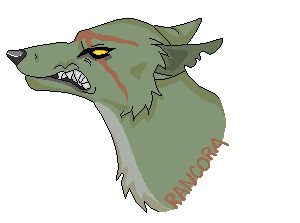 Cora's skin opened up in rashes, the fur that grew back was a dying color, greenish and so dry it would break by the gentlest touch. Her feathers were darkening, and one by one they would fall. She wasn't allowed to see her daughter and her mother was prohibited to visit. She was all alone in a hospital room, locked up like a wild beast. But to see her family again, she was patient.

Until the day she wasn't patient anymore.

She was getting too afraid, too paranoid about that whole infection thing, and antidote, and hospital. Those doctors that wouldn't show their faces, the exams and their awkward protocols. And she was starving. And being as treacherous as a Montre could be, she trapped a nurse that brought her the daily meal and escaped the room. It was time to run away from that place and find her family, did her mother survive? And what about her lovely daughter? Where would they be hiding, if they did manage to escape that hell?

Many years have passed since then. The plague was just not forgotten because of the Survival Celebration, yet she roams uncured, infected but never infecting, always fighting against her cravings of cannibalism. Cora made a promise to herself to ignore her meat cravings and find her daughter, whom she keeps looking for until today. She's still conscient about herself, but time is passing by fast and who knows what will be of her fate — she managed to gnaw on every bone of a whole wing from her own back without even realizing it, if that's not a sign her sickness is evolving... She'd rather not think about it!

"It is starting to rain again,
I'm coming closer to my end with every breath;
The creepy shadows are growing pale
And the rising glow brings along the sense of death." Folklore
I won't be a part of this! Ick
What are those vials?! Wait!