Headley has a minion!


"I'm a stitch away from making it
And a scar away from falling apart;
Blood cells pixelate and eyes dilate
And the full moon pills got me out on the street at night..."

Headley the sympathetic, the gullible, the sweet. Said girl was a nurse in training, so dedicated and naive, she believed she could save the entire world just by cleaning wounds, stitching pieces back together and wrapping it all up in nice tight bandages. She was very dedicated and, cross her heart, she believed helping others was her destiny. She may not be clever enough to become a medical doctor, or maybe it was her insecurity that was enough, but Headley just adored to be in touch with her patients the same way, the sweet girl.
The pandemic arrived. All hospitals were such a chaos, there was no Louis L'Amour back then. Everyone was supposed to protect non-infected and the way for it was erradicating the problem by its roots, and that meant killing the infected. Oh sweet stupid girl, she would have flunked nursing school for the primary mistake she made.
How come a trained (or in training if that matters) health agent be so carefree to let a patient bite them? 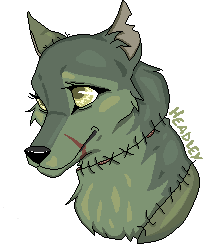 She ran away, our poor girl, for she believed she could still be good to the planet, save a life, oh please let her save at least one life before she's gone! But by doing that, she was putting life at risk too. She was a threat to non-infecteds, and she was hunted down and payed her disobedience with a cruel death. Her limbs were ripped so to be an example to other fugitives. Then, as the means of execution of that time, her head was chopped.

But see, lady Death is a bit soft-hearted and wouldn't keep someone from their true vocation, specially being someone so passionate about it. That's how Headley awoke, a couple nights after her dying, from her grave — her nails were never the same since she had to dig her way up from the ground.
Headley's got a new chance to do good, after hiding in Shadowglen for so long. But it was finally safe to get back, and keep on her nurse training — I mean, at least now she had her own body to practice stitching.

"Blood cells pixelate and eyes dilate,
Kiss away young kills and thrills on the mouths of all my friends."

FallenSamurai;
Background image from Wallpaper Vortex;
Lyrics: The (After) Life of the Party by Fall Out Boy. Ick
Please... We need to help the others.