Sater has a minion! 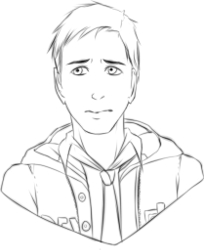 "We're the ones who decide
if we can live with what we've done."

He is drunk again. The only way to forget what he had done. He? No, he didn't do it, that's a lie. He would never hurt anyone. He shakes his head and takes another pill, swallows it down with cheap beer. Sighing he closes his eyes, shaking the empty pill bottle in his left hand before he throws it against the wall where it crashes into thousands of small shards covering the stained flooring.

A few months ago, shortly after that tragic accident in the mines happened, everyone claimed that is was his fault that the tour train derailed, that he was drunk and shouldn't have operated it. Those goddamn liars! He wasn't drunk. The people always hated him, needed a scapegoat for this tragic accident that still was a complete mystery to him, that's why they wrote these things in the newspapers.

JOHN P. SATER THE MURDERER ACQUITTED OF A CHARGE - the latest article, but for sure not the last. For a brief moment he thinks What if they are right? What if...? but then he pushes these thoughts aside. He takes the newspaper, reads the article once again before he carelessly throws it back on the table.

ACQUITTED. As if this would ever change anything. He lost his damn job already, people stare at him as if he's a monster - no one would ever think about forgiveness even if there would be 100% proof that he isn't the one to blame for this accident.

Murder! - Murder is a mortal sin, sinners go to hell! - and he doesn't want to end there. In fact he's already caught in his own personal hell since his childhood, but no one will ever know. As if anyone would care anyways, in fact no one ever did.

In his head he hears kids laughing, the rattling of the train wheels on the rail. Smiling he lets himself fall back onto the sofa where he now lies, head on armrest. Suddenly the laughter turns into screams of fear and agony, he hears a crashing sound, crying and screaming in pain and then... silence. Cruel silence.

His head hurts, tears start to run down his face as he closes his eyes, sobbing. He takes another huge slug of alcohol, his whole body feels so numb already, but that's okay. Another bottle of small white pills is opened, he swallows another one, then another...

Maybe today he will jump down the 1,419 feet right into the black deep of the Devil's Pit. He is done with everyone.

* Profile and story by me

Wretched Coin of the Street Ricarda
I love you, my little girl. ♥️