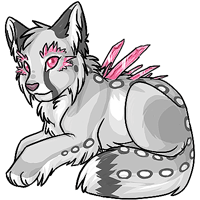 My mom is such an amazing person. She's always been super supportive of me in everything that I've ever done. I remember back when we still lived in Barbados she signed me up for dance classes. I learned a lot in that class and when we moved to New York she immediately signed me up again, mostly because I enjoyed it so well. Of course, dancing back then and dancing now are two totally different things. I'm pretty sure if mom knew what kind of dancing I preferred now she'd completely freak. Anyway, my mom's an Alaskan Malamute. I'm not entirely sure where she got her eyes from, but I know that's where I got mine. She's also seriously been bothering me over the years with "when am i going to have grandkids" super embarrassing. 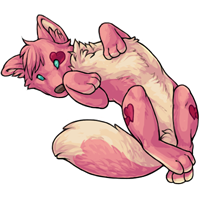 My dad is as equally amazing as my mom. He's basically like a giant teddy bear. He's been as supportive as my mom really. Being his only child I'm kind of his "special little girl". I'm not sure he likes the thought of me living on my own and working at the diner all the time, but I think he's just worried about me. He should know I'm okay though. Considering how embarrassing my mom's been I tend to just call or text my dad lately. I know he likes for me to check in with him anyhow. My dad's a Siberian Husky/German Shepherd mix and recently I found out he's a werewolf. Nothing's changed much since though, dad's still the really amazing person that I look up to! 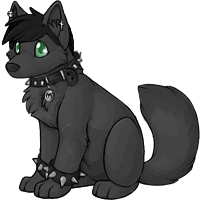 Where do I start with Midi. Gosh I've honestly never met someone quite like him before and I really wish I could've met him sooner. He's incredibly sweet and call it sappy, but he makes my heart flutter. I would definitely say he's a book that you shouldn't judge by their cover. He knows just what to say to get my blushing like crazy. He's a manager, for bands and the like. From what he's told me so far it's just Aed and L4L right now. I know he keeps super busy, but he says he makes time for me and I am so glad he does. I want to spend time with him always. It might be a bit early to say so, but I really do think we have something special and.. I love him a lot. 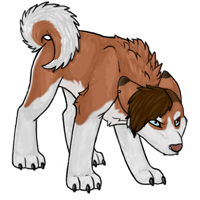 Trip lives with Trigger in a building close to where I work. He stops in from time to time and gets food to bring back home usually. I guess he's one of my regulars. He used to not talk to me a whole lot when we first me, but he's gotten better about it. I just know he really likes the food where I work. Unlike my dad he's 100% Siberian Husky. 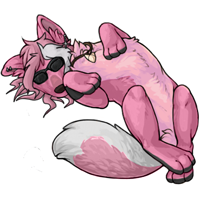 Trigger is very unique. He's always got sunglasses on. Trip tells me it's because he has a light sensitivity. Actually, Trip tells me a lot about him because I myself have a little bit of a hard time understanding him. He's got a speech impairment. Of course, the first time he walked into where I work and started talking I kind of just stood there dumbfounded. I had to politely tell him that I didn't understand. He obviously didn't take it to heart or anything and just re-phrased it. I felt super bad about that and I think that's why Trip tends to talk for him. Trigger's a wolf, more specifically, a werewolf. If Trip hadn't told me I don't think I would have ever known. Honestly to me he seems way more laid back than what I've read in comics and things about werewolves. I guess I never really thought how Trigger and I are about the only pink canines here before, but here recently I found out that Trigger and I are related. He's my brother! I really would've never guessed that. Since I've found out, Trigger and I have been going to our parent's house a lot lately to, y'know, learn more. Trip's been tagging along to translate for everyone. 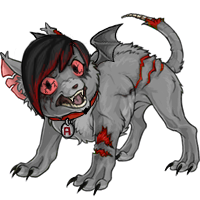 Aed is... something. I'm not entirely sure what, but just something. Trigger brought him into the diner once. We started chatting, he started flirting.. or at least I'm pretty sure that's what he was trying to do. Well, it sort-of worked and he ended up staying the night. It wasn't until after I started talking with Midi that I learned he's friends with him and some famous rapper or something. Yeah, that's uhm... going to be... fun to talk about x.x;; 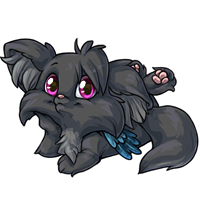 Scycle is another one of my regular customers. She's a vampire and quite a bit younger than I am. Of course, she can be fairly mature for her age. I'm not entirely sure of everything she does, but from what she has told me it's incredibly important. She tends to grab a coffee or tea at least once a day, usually twice.

Zay
with help from

Teach Yourself to Dance

Dance with Me Sticker

I am a Scrap Dancer Sticker

Dancing Is Not a Crime Sticker

Love in the Air