Wolfen has a minion!

♡♥♡♥♡
"There is no pain you are receding
A distant ship smoke on the horizon
You are only coming through in waves
Your lips move but I can't hear what you're saying
When I was a child
I caught a fleeting glimpse
Out of the corner of my eye
I turned to look but it was gone
I cannot put my finger on it now
The child is grown
The dream is gone
I have become comfortably numb."
-Comfortably Numb by Pink Floyd
Most creatures could never understand the feeling of reincarnation. Most living things get their one shot, and once it is over it is over for good. Not for Wolfen.
Wolfen had spent many years in many different bodies, and somehow he was able to remember each of his lives without flaw. He had traveled far and wide - once he was a bug traveling across Subeta's vast terrain, another time he had been a fish with nothing but the singular desire to swim upstream and produce offspring. But most notably - he remembered being human.
Humans had a unique quality to them. Their ability to think logically was unmatched by the average creature, which often left them feeling confused and thirsting for knowledge. Their hatred was vast and terrifying - only matched by their passion for love. Wolfen had experienced it all while human. He had a large family with beautiful children and grandchildren. His wife was the love of his life, and he lived every single day for them. Even now that he had moved beyond his human form, he found his heart full of warmth for those he left behind. It would always be his blessing and his curse. It wasn't enough to be reincarnated after death, but to remember every life he had ever known.
The thought made his heart ache. How he missed his beautiful family.
When he had been reintroduced to the world once more, he had found himself inhabiting a vessel he was unfamiliar with. His body was covered in thick pale fur, warm and plush against his new flesh. His ears were large triangles that framed his head in a flattering way. From his shoulders a set of mighty feathered wings had sprouted. His head was crowned with a beautiful halo that shone brightly and followed him where ever his paws took him. This reincarnation was different. He had come to rest in his final vessel. If he were to die again, he knew this would be his resting place for eternity.

Wolfen Marshall is a very unique creature, having once lived as a human. Because of this his blue eyes take on a wise demeanor well beyond his years. His pelt is ashy white with subtle hues of blue and purple. Large feathered wings extend from his shoulders, allowing him to fly comfortably.

Pure at heart with a desire to help others, Wolfen is usually a welcome sight for anyone. He is wise beyond his years and knows how to offer expertly thought out advice. He can be sharp tongued and slightly humorous when trying to prove a point. But more than anything, his light touches each and every person he encounters. His soul is filled with good intentions.
"Why should I be frightened of dying? There's no reason for it, you've gotta go sometime."

-The Great Gig in the Sky

Hemic is a sarcastic creature with a natural ability to control both water and air elemental abilities. He has changed drastically since turning into a Lasirus, originally being a Lain. He is a little too edgy to be super close with Wolfen, but does care for him.

If a thunderstorm could have a personality, it would be Deirdra's to hold. Often contemplative but rough around the edges, she can come off as distant and uninterested. Surprisingly Wolfen and Deirdra are rather close. Wolfen enjoys her storms on a spiritual level. 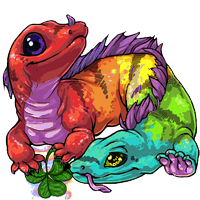 Noktis is an interesting creature. Featuring a head on either end and the ability to sway natural luck in either direction depending on which head bites you, Noktis is well known for using her abilities to teach a valuable lesson to greedy folk. Wolfen finds Noktis amusing, and can't deny he has an appreciation for her ability to make her own rules.

Supersonic is a lovable creature that could befriend anyone in a matter of seconds. She is perpetually happy and good natured with a desire to brighten others lives. She can be a little overbearing to some, but most fall for her charms quickly. Wolfen enjoys Supersonic's bubbly personality.

Stitchie was the result of some experimentation in his own personal lab. He eventually became an animated inanimate creature filled with plastic beans and stuffing. Despite his strange new life he considers his secret experiment a great success. Wolfen hasn't spent much time with him.

Beautiful and often admired for her soft personality, Sooki's elemental ability to control plants and fauna is often used to bring smiles to the younger animals that share her forest home. Sooki is friends with everyone, and Wolfen enjoys her friendship. 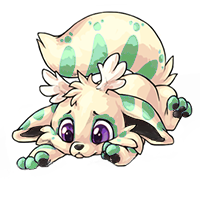 Sirine is a positive thinker with a cheerful demeanor, making her home in the forest with Sooki. She is often right by the Earth elemental's side. Sirine is possibly the only thing that could rustle Sooki's fur enough to cause a level of protective viciousness, however her time alteration abilities make her a powerful force. Wolfen enjoys Sirine's friendship.

If anger had a face, it would probably be Scylar's snarling hiss, as the most temperamental of her siblings. Her family is fiercely loyal to her despite how unpleasant she can be. Wolfen finds her to be very difficult to be around, but tolerates her regardless.

The smell of grave rot lingers in the air around Putridity. As her necromancy abilities flourished, her own body deteriorated over the years. She is constantly patching herself as needed. Wolfen has a soft spot for Putridity, having known death personally. He's one of the few who can stomach her scent. 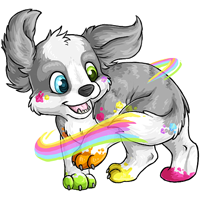 Kaleidoscopes is perpetually upbeat, which is either loved or hated depending on which sibling you speak with. Kaleidoscopes pays that no mind, living in her blissful rainbow euphoria with her best friend Festaval. Wolfen likes Kaleidoscopes quite a bit.

Gwar used to be a military man, but shifted lifestyles many moons ago. Eventually, he grew to see a higher purpose in the world and his desire to be a part of something bigger. He has left his fate to the cosmos ever since. Wolfen is one of his close friends, often confiding in him and seeking universal advice.

Graice is incredibly adventurous with an appetite for in the moment situations that often get her into trouble. Wolfen has a soft spot for Graice, as she is the only other one who has gone through a similar transition to him.

Festaval is the other half of the rainbow pack, with a perky personality and a soft heart. He cares deeply for others even if they do not care for him. Just like his rainbow sister, Wolfen enjoys his company. 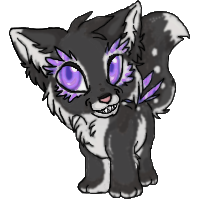 Pixiey revels in madness, finding humor in both good and bad actions. She has the ability to see the future and enjoys twisting it to suit her own purposes. Pixiey comes on a little too insane for Wolfen, and he tends to stay away from her powerful influence. 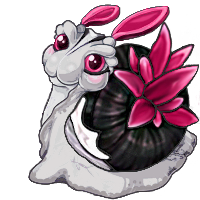 Dobbie is a slow, friendly fellow. His demeanor is sluggish and often timid. His ability to emit light and use it to his advantage makes him a friend to most living creatures. Dobbie is one of Wolfen's closest friends. They are often seen together near Dobbie's river meadow.

Incubis is the master of mental manipulation, able to temporarily input thoughts, images and false memories into any living things brain. Being close with Pixiey, Incubis spends very little time with Wolfen.

Levyna is a beautiful sight, but can be dangerous when her powers are not under control. She withers living things away when utilizing her abilities. Plants become sunken and crunchy and animals loose a lot of their will to fight. Although her abilities alone do not kill her enemies, the recovery and exposure often does. Wolfen finds Levyna's powers oddly beautiful, admiring her work from a distance.

Lucien is haunted by the shadow of darkness, making him seem distant and often vacant. The dark energy that emits from Lucien is powerful enough to repel Wolfen on a spiritual level.

Prickled is very intelligent, often found in his workshop creating schematics and contraptions. Wolfen is fascinated by his creations and enjoys spending an afternoon with Prickled learning.

Syiren occasionally likes to make trips down from her mountain, but doesn't usually wander too far from home. She is a very solitary creature with a love for extreme climates, and several others have nearly frozen to death attempting to approach her domain. Wolfen is one of the few who can tolerate the cold, so he is probably her closest friend. 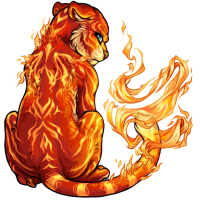 Ignescent is distant but powerful, with fire abilities that can level entire populations. She lives inside an active volcano, well known for isolating herself voluntarily. Wolfen will occasionally visit her, although he is unable to visit her within her home. 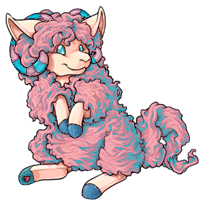 Candied is a pleasant creature, tending to be as sweet as her cotton candy pelt. She is shy but kind hearted, often charming those who get to know her. Wolfen likes her a lot, often detouring on his adventures to visit her and try a piece of the candy she loves to make. 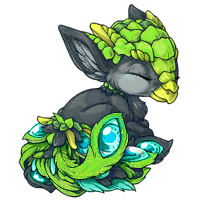 Eyed is incredibly dangerous, constantly emitting a powerful amount of radiation. Because of this she is usually found in the deepest corners of a glowing cave within the desert. Due to her radiation Wolfen tends to avoid her, although he is aware of her existence.
Wolfen is a memorial pet dedicated to Roger Collin Marshall, the warmest and kindest man I've ever known. He is, and will always be one of the best parts of who I am. I miss him every single day. Thank you for teaching me so much, and loving me no matter what.