Quantum. has a minion!

Thundercracker | background | Equation cat image by: Theresa | Necker cube by: Jie Qi |
Schrödinger's cat
The quantum theory created by Schrödinger, is now referred to as Schrödinger's cat.
In a sealed container a cat is placed along side a flask of poison, a radioactive source and a Geiger Counter to detect radioactivity. Any radiation detected the flask is shattered releasing the poison that kills the cat.
The Copenhagen interpretation of quantum mechanics implies: After awhile the cat is simultaneously dead and alive. BUT when anyone looks into the box they will see the cat is either dead or alive, not both. This poses the question of the exact point when Quantum Superposition ends and reality becomes clear. The cat is dead. The cat is alive.

Supposedly this can mess with the mind if contemplated for too long. 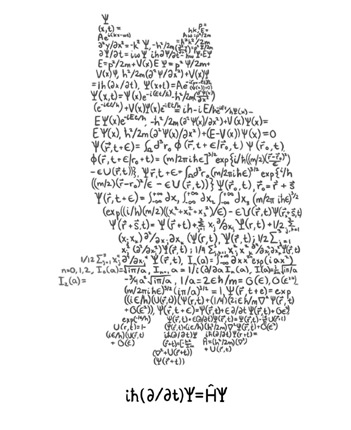 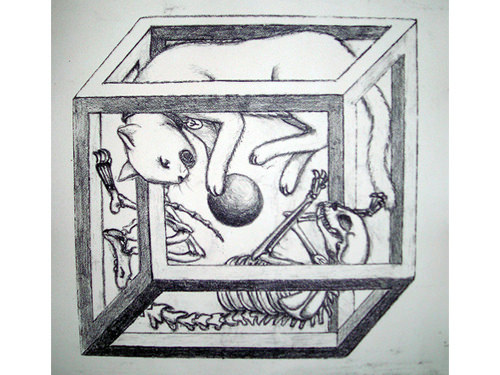 next
Pet treasure
"Is the cat alive or dead?"Sark asked looking at the sealed metal box perplexed.
"That is the question and the answer at the same time." Hess answers with an air of amusement.
"Indeed.... but was the cat alive when you put it in the box?"He drew nearer, unable to hear anything from within.
"Of course it was, It wouldn't be an experiment if it wasn't." Hess smirked.
"And how long has the cat been in the box?" Sark dared ventured. "You're known for missing steps in your college experiments."
"A.. a week? Maybe ... might be more." Hess answered uncertainly thinking of how long he actually left the cat in the box.
"The cat is dead, Hess. The cat is suppose to be in the box no more than a few hours."Sark sighed. "Regardless of the experiment, it starved or suffocated to death."
"Are... Are you sure about that?" Hess asked giving a tentative poke at the closed box.
"Yes Hess. I am sure." Sark headed to the door of the lab. "A cat requires food, water and oxygen to live. The box is sealed, even if the radiation was not released, it died."
Lifting the heavy hinged lid, Hess peered into the box . "Oops." Nervously looking at his brother. "Do you think anyone will notice?" closing the lid.
"The cat missing? Or the smell?" Sark covered his nose with his hands trying not to gag.

Fart Gas in a Jar Hess
A Doctor of sorts.