Kaido has a minion! 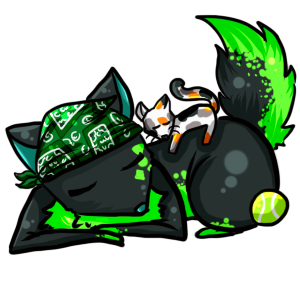 I like cats. Ya know, not like with ketchup or anything. That's just gross. Naw, I like cats. Those perky ears, that mesmerizing twitchy tail.. It’s just, whoa. Oh yeah… Tennis, that's really good too. Cats playing tennis? I am so there.

I know this really hot red-headed Feli. Her head might be up in the stars a bit, aliens and conspiracy stuff, but can she ever swing a racket once you get her away from that telescope! Seriously a beautiful site. Though, of course, she’s usually swinging it at my head and not at the tennis ball but I’m totally cool with that. These things, they take time. And Band-Aids. Lots of Band-Aids…

I live with an old school mate in this huge ol' house he owns out in the country. I met Hoshiyo through his girlfriend. She's not too keen on me but they say opposites attract right? Because, positives repel?... Yeah, I don't really get it either but it's all good! My parent's recently sent my magic obsessed little sister out here to live with me. Scorpius. has the space. Things are pretty wild and crazy sometimes but maybe Hoshiyo will see how well I handle it all and be impressed by my maturity and control in adverse situations. Yup. Though Scorpius says she probably thinks I'm a nut case just like everyone else here. So, does that mean she likes nuts? Because I like nuts too! So that means we have something in common right? High five for me! Maybe I should get her some nuts as a gift. Do they make nut baskets? Hmmm...

Recently, I've been watching that eHarmony vid. For inspiration you know. And hope. Hope is good. Especially with orange juice.

In the meantime, I do a little volunteer work at the minion market, give some tennis lessons and bide my time. I have plenty. Time ya know. Lots of time…

Credits: Profile, contents and overlay edit by me. Tennis Racket CI by Hoshiyo
She won't date me. Yet. But that's cool. One band-aid at a time... Rosamaria
My little sister. She's uh... unique. What exactly is a muggle anyway?