Mothra has a minion! 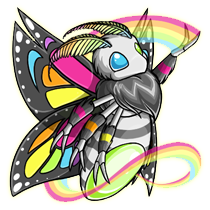 She has been called many things, through many millenia. Eternal, but not immortal, she has always been there, in one form or another, and always will be. She is the ultimate mother figure, protective of her egg and later her offspring, her worshippers, and her Priestesses.
She is benign, peaceful, yet it is all too easy to forget one important detail.

She is a protector of the Earth, but not necessarily of Man.
She has seen human greed, pettiness, hatred and our complete disregard for the well being of our own world.

There have been many times she has simply protected the natives of Infant Island, and the Shobijin that often translate for her, and left mankind to their fate rather than interfere, especially if humanity foolishly chooses to disregard her warnings, or bring destruction raining down through their own ignorance or arrogance.
But when that destruction comes in the form of other Kaiju, sometimes she has no choice but to step in, even at great personal risk. Because if she does not, those monsters would surely not stop at just destroying humanity, they could endanger the very planet.

Mankind has stumbled upon her symbols, or learned of the Shobijin and their connection to Mothra and figured out how to call on her great power many times, and many times they have been disappointed to learn she has no interest in their petty concerns.

So think carefully, should you find yourself wanting, and able, to summon this mighty creature. Remember YOU are the insect here, in her eyes. She will always be EARTH's protector. Not necessarily yours...

Credits Images from godzilla.wikia.com
Story by

Cocoon of the Benevolent Moth Companion