-Stormy- has a minion! 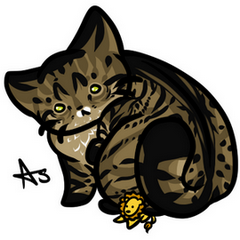 The song lyrics are inspired by a song in the movie Paulie, which also explains the parrots in Stormy's treasure. When I was little and Stormy was a baby kitten I watched that movie and began singing the song as a lullaby to Stormy and the rest of his litter. It quickly became a tradition to sing it to them and even after his brother and sister found new homes I would sing it to him often at bedtime and I sung it to him during the few minutes we spent together before our last goodbyes.

Lastly, the little lion represents a plush Simba toy I got in a happy meal when I was little. Stormy stole it from me on many occasions and would flee quickly down the hall with his prize.

I miss you, Bubble Butt.