helix (get yours here);
Free background from Wallpaper Better;
Adopted from

It’s another ordinary night for you and your friends, all together for one more late night party of drinking and being crazy – teenagers living their best life and minding their own problems through licit and illicit drugs, and even though you’re just fine with a couple of beers from the suspicious and tad dirty bar, at least you are having a blast. Your friends are there, the music is loud and the room is filled with unnecessary fog from cigarettes but it is an overwhelming sensation. It’s going to be a good night, for sure.

After dancing your heart out with your bestie, you step aside to get another cold beer and rest, and while taking a sip, your eyes roam the room – the nightclub isn’t that big, you and your friends always preferred it to be that way – and you come across this guy staring right back at you. No big deal, you think, after all your self-esteem really is there for you, and especially after rocking some moves at the dance floor. You look away.

Your eyes explore every inch of the dark club around you, from the foggy ceiling to the dusty corners, but you can feel those eyes, his eyes, like they are fixated. You look back to his face, maybe if you put up an ugly face he’ll come to his senses and stop being rude. There he is, alone, and the light of the club flashes just as your eyes meet his – you see his eyes fully black and curly horns from his head. What? Perhaps you are just a bit intoxicated from the party – was it the beer? You look again, there’s no such thing. Just a creepy guy. You blink again to make sure – and he’s gone.

You decide to let go, “whatever”, as you think to yourself. You chat with some of your friends, you pass that other drink to a stranger and make more friends, you go to the bathroom, you’re back to the dance, and you’re tired now. You sit by the bar, and something reminds you about that guy alone at the corner, whose eyes were fixated on you. He’s not there anymore, and you are reliefed. Perhaps it really was the smoke, and on that thought, and you decide to step outside for a bit to catch some air and light your own smoke, still a bit disturbed about your own thoughts.

It is very peaceful out there, a big difference to the inside of the club. The streets are empty, not a single soul roaming the night, you can finally shake that image from your head.

You hear the sultry voice and feel a very cold touch on your shoulder – you startle and take a step away to face whoever is touching you. It’s that guy. “What the hell, you scared the shit out of me!”, you could be a bit more educated but who cares, that guy literally just put his gelid hand on your shoulder and who does he think he is for just coming out of nowhere like that?

You definitely could put up a fight. You’ve had it with that guy, and after the jumpscare you can feel that adrenaline rush. Heck, you could punch him in the face! You don’t. As you stare back at his eyes, you can see the black from his pupils taking over the entire orbs. He wears a bandana like a mask, so you can’t see his nose or mouth – only the creepy smile painted on the black cloth. Not to mention the giant '13' tattooed on his bare chest. He’s very pale, his dark hair highlights that. Now the eyes are black, and you can’t look away. He places one hand on your shoulder again but you can barely notice the scars under the sleeve, because with the other he is pulling that bandana down, slowly. His mouth is cut in a thousand pieces, several holes across his cheeks and chin, it’s like he’ll suck you inside, your soul, your... your head is too ligxct, weightless, and you can’t feel your body. All those horrific dark holes are taking over your sight, the disfigured face of that creepy stalker, his hand feels like iron on your tender body, you are nauseous but you can’t throw up. You faint.

You wake up lying on the back seat of the car, your friends are there, they are taking you home. By the look on your mother’s face, she’s had it with your drinking, but you can’t even create a sentence, you barely stutter a word. She puts you in bed after some long talking, complaining and advising, that same old she always does whenever you pass out with your party friends. “Bad influence”, “your health”, and the same old you expected, but this time you can’t distinguish much. You just lie there in bed, exausted like you were drained, and you’ve never felt like that before. The window is open and the breeze coming inside from the yard is refreshing, revigorating, and it’s... wait... are those horns poking from the window? Or is it just the tree laughing at your scared face? You can even see it staring at you, the dark eyes of... the tree? 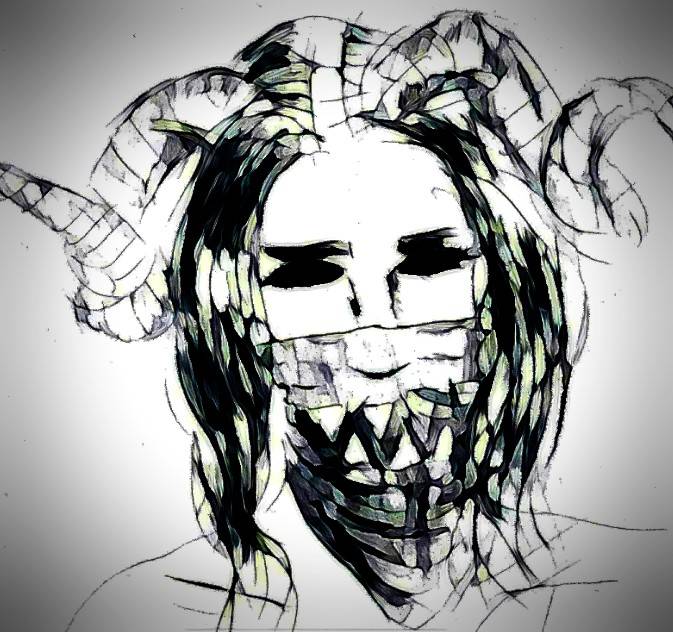 Vos
I see you, lurking, in the dark.