Serrated has a minion!

He was born in the dark. The dark and the gloom. Rolling out of the egg, he shook off the goo and let out a startled squeak. Dirt from the ground clung to his wet scales, as he stumbled awkwardly and comically to his four feet. His wings still snug against his body.

Somewhere he could hear the echoing of excited peeps and chirps, small soggy earfins perked up, trying to source the sound. Stumbling and tripping he slowly wobbled and weaved his way up the long dark tunnel to a lightened opening. The hollow of the cave was much bigger, dwarfing him and those he could make out encircled around something, it smelled good. Nice good.

"Ohhh look a new hatchling!" One of the heads turned. The orange lights flickering from the walls shone against the orange eyed hatchling looking at him. It's scales glossy, the wings equally reflective of the light.

"Ewww, it's a basic." Another huffed in complete disgust. The blue scales of that one seemed to be hard like the walls themselves with brilliant sharp edges and crystallized scales.

The rest of the small dragons turned their back to him. In confusion he stumbled forward to see what they were huddled around.

Some turned and hissed at him. Others squished their bodies together giving him no chance of getting near the circle.

All of them looked stunning with shiny scales, swirling patterns and different colored of spines along their sharp ridges.

A large dark shadow ambled forward with careful claws. Huge compared to the little hatchling. A great wing lowered, sweeping him in a curl of the strong leathery appendage. Wiggling, he spotted the circle the other hatchlings were surrounding. The smells confirmed of substance. Food. Of sorts. With a blurr of colors he was hauled away from the others, then tucked into the wing. Again surrounded by darkness.

Sometime passed, the little one had fallen asleep from the excursion of hatching and walking. The wing around him soothed him and warmed him. Right until he was unceremoniously dumped onto the cold ground.

Squeaking in shock, shivering in cold. The little hatchling watched the shadow turn and go.

Left in the center of a large circular rock formation, the small hatchling only hours hold hunkered down feeling terrified at the blurry walls he couldn't see too well yet. Fire seemed to surround him. Slinking backwards he yelped bumping against something and ran forward in terror. All the way to the high stone walls etched with statues of dragons, each one with a small banner of information on the side identifying the statue. Gawking at the amount of them, leaning his head back, unable to see where the small carvings ended. They continued all the way up the wall, where fire seemed to lick at the ridge. Wandering along the wall, he found a crack one big enough he could wiggle into and follow to the back, completely hidden in blackness and able to awkwardly turn around to face the sliver of light.

A shadow blocked the light. A bulky shadow wiggled awkwardly to fit in the very end. The head looked like it was all jaw with tiny eyes.
"Hey, what are you doing in here? We're suppose to be in the center to ascend to serve our Deity Flamecaller." The voice a deep resounding growl, had a lull of almost indifference to it.

He didn't speak, just cowered. Not wanting to be taken again into the light again.

"Aww it's okay. Oh wow you are young. You're claws haven't hardened yet." The large shadow spoke.

The heat came before a bright flashing light from outside. He could see the hatchling before him. Large white with black spots and wings that didn't look any more useful than the stubby tail. A scent about him didn't smell like his birthcave of ash n' fire, it smelled darker, like the shadows they hid in.

"Come on, let's see what that was." The larger dragon backed out of his way, letting the light in again.

Warily, he followed nervous and timid.

The other hatchling wasn't a mere hatchling. It was obvious he was older but not a full size yet. Beyond him, a circle of stones smoldered in a pile of ashes.

"I'm Brazen." the other dragonling stated leaving him to sniff at the sacrifice mound.

He didn't go towards it. His eye sight able to see that far and he didn't want to examine it any closer. Death. The smell was death that lingered he reasoned.
Slinking along the wall, the little hatchling headed for the opening of the cave. He wasn't going to hang around to die as well. He wanted to live.

Brazen turned his head watching the newborn. "Wait up." He called hurrying to the small one. "You won't make it on your own." ambling beside the small hatchling who made it to the cave's entrance but tuckered out.
"Come here." Brazen chuckled amused as he picked the soft scaled hatchling up with his mouth and unceremoniously tossed him on his broad back.

Squeaking with indignity of the launch and equal sprawl landing. He looked at the big head and gave a small squawk that sounded more of a squeak.

Brazen chuckled. "It'll be okay. We'll find some place to rest until your scales harden."

The small cave they found and rested in was enough to grow in. The smell of death from the burning fires lingered. The Exalting of dragons to serve the Flamecaller continued daily. It filled him with sadness as his scales hardened with serrated edges, one night curled together;
"Move over, you are as sharp as a knife." Brazen hissed."Can I be called blade?" he raised his head in awe.
"No." Brazen rumbled tiredly. "So overly common and uninteresting." He paused cracking open an eye to gaze at the gray dragonling.
The sharp edged ridge claws now able to dig. He closed his eyes and huffed. "Serrated."

"I like that name." Serrated smiled. "It sounds like a fighting name." yawning he closed his fire-orange eyes and settled for another night.

The sadness lingered until it was ebbing to anger and rage. The gnawing hunger finally drove the two out of their cave. They traveled across the ash covered and lava flow wasteland. Small insects and scavenged meats were their diet. All the while the anger causing a bitter taste in Serrated's blood.

He was more than some sacrifice! He was to be more than something someone deemed him. He was his own dragon! He was going to show them all! 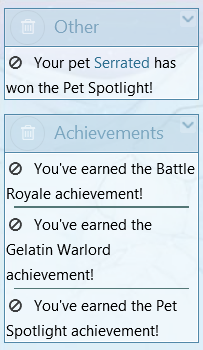 Dragon-Torn Locks of the Unburnt