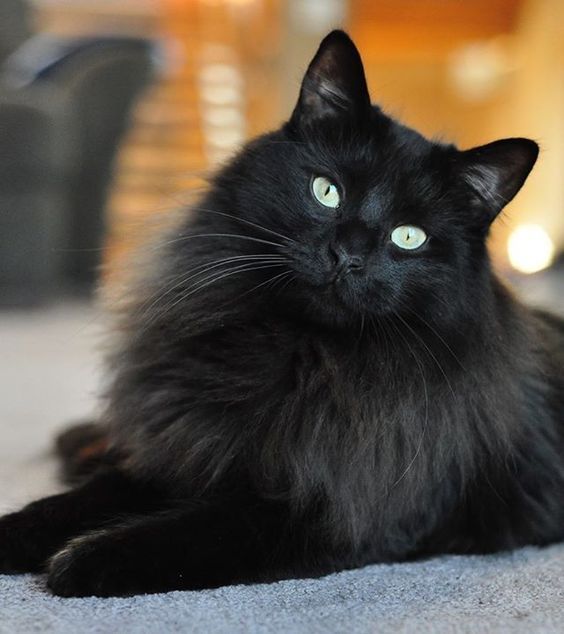 The Brimstones are a family of cats and are familiars. Being a familiar means they have special auras that can contribute to the magic of those they choose, if they do. There are currently 4 in the vicinity of Dapple's woods, but only two live in the house full-time, Floofer always, and Brimstone, the other two come and go as they please but are always welcome. All can be a handful and cause quite the chaos if left unattended too long. They are beautiful with yellow eyes and silky, long fur. The trick to knowing how tame one is, is that it's equal to the amount of black in their fur. A big male and smaller female are both all black and have stayed that way so far.

Dapples named the family of familiars the Brimstones after her favorite, a small male that started out all black but bits of white began showing up on his chest a few months after she started befriending him. She fancies it was her love that caused the black to fade to grey, until now he has half a white and grey belly. He's still a handful but he's also so full of love. She reminds him of how handsome, sweet, and wonderful he is every day, and holds him when no one else will. She doesn't mind his kind of trouble and now that he knows he has a 'momma' cat in his person, he's become the best familiar a witch could have. He has high energy but a deep, secret love for snuggles.

The final kit of the litter is quite different from his black as night siblings, Floofer is an all grey giant fuzz-ball and his favorite thing to do is be held in your arms as he licks your face. He's fun to play with but he's a lover through and through. He will purr into the next dimension if you hold him, she calls him her wookie baby.

Brimstone loves to try and eat cottonballs. If you are washing the window he doesn't mind if cleaner gets on his fur as he rubs against it. If you try to wipe a counter, he'll be right there ready to help. The moment he sees you he'll let out a meow much to cute for his level of mischievousness. Once held he'll melt in your arms, once suitably bored he'll jump down, but don't worry, he's back at your feet, rubbing up before you can move. He needs to follow you everywhere. The other cats are okay sometimes but other times if they get to close to the both of you, he'll give them a swat.
-Click for Credits-
Brimstones belongs to

Story and Profile by myself,

inspired by a special bunch of cats i work with at my job at an animal shelter.