Today you decide to stop by the Bake Stop for a treat. Upon entering the shop, you are met with the aroma of freshly baked treats. Mesmerized by the scent, you gaze at all the goods on display, off in your own world. Your admiration of the food is interrupted by a masculine voice, unusual for the Bake Stop.

"You're thinking, my goodness, Lyxander has certainly outdone himself this time. These cupcakes have turned out perfectly!" His pink hooves reach towards a tray of cupcakes nearby on the counter.

The Sweetheart Devonti, whom is probably named Lyxander, lets out a single, muffled chuckle. "Hm." His head is still turned with a smirk. "You can have one, you know. It'll be our little secret."

You approach the counter and peer into the tray. Lyxander continues to smirk as you take one and bite into it. The flavor is delectable, absolutely mouthwatering.

"Oh no!" Lyxander suddenly exclaims. You nearly choke on your cupcake, startled by his outburst. "Where's my Blob Kitty?!" He shrieks.

You forcibly swallow the bite of cupcake. "B-blob Kitty?"

"Oh Shinwa will you look?!" Lyxander cries out again. His hooves stretch out towards you as he holds a cupcake. When you look inside it, a Blob Kitty's face peers out back at you from the cupcake paper.

"Oh my gosh!" You gasp. Lyxander suddenly pulls the cupcake containing the Blob Kitty back towards himself and sloppily eats it. "Huh?!" You say, bewildered. You also manage to drop the rest of your cupcake on the floor in surprise.

Lyxander laughs, "this is not my Blob Kitty!" You are very confused. "This is just a cupcake I decorated to look like a Blob Kitty," he explains. "Oh, here's my Blob Kitty!" He scoops the creature into his arms and places it on the counter where you can see it. The Blob Kitty is covered in pink frosting. "He gets into the ingredients all the time. I guess he has a sweet tooth just like me!" The Blob Kitty meows cutely and, as it is limbless, uses its tail to navigate towards you. You pet the Blob Kitty, despite the frosting.

"There," Lyxander says. You look over at Lyxander and see him holding a pencil in his mouth, which he places on the counter. In front of him is a sticky note that he picks up and sticks to the Blob Kitty's fur. It reads 'Don’t Eat.'

"That's his name," Lyxander smirks again. In your mind you decide immediately that Don't Eat is a very strange name for anyone, even a minion.

Suddenly Fantine emerges from the back room. "Lyxander!" She scolds gently. She turns her attention to you. "I am so sorry, he's new here, working as an apprentice," she says.

"Oh, it's fine," you say. After all, Lyxander hadn't done any real harm.

"Lyxander, will you please clean that cupcake up? And I told you not to let Don't Eat onto the counter," Fantine sighs in exhaustion. Lyxander shyly waddles out from behind the counter, coming around to you. He's balancing himself on his hind legs and has a rag draped over one of his front hooves. You step back as he wipes up the mess you made.

"Sorry about that," you say.

"Accidents happen," Fantine says. "Can I get you anything?"

"Oh, Lyxander gave me a…" You trail off and realize that you only had a bite of the cupcake he gave you. "Yeah I'll take one of those," you say as you point to another cupcake sitting in the pan. Lyxander finishes cleaning and waddles back around behind the counter. Fantine offers one of the cupcakes to you and you place the sP in her other outstretched hand. "These are good. Did Lyxander really make these?"

"Yes, he did," Fantine says. "He’s really talented. That's why he works here at the Bake Stop. He's a little clumsy, though, and socially awkward."

"I know how that goes," you say, eating the cupcake. Lyxander has shrunk down below the counter and only his blue eyes are visible as he stares at you and Fantine.

"Yes, thank you," you say as you finish the cupcake.

"Come back anytime," she says. You head for the door and Fantine returns to the back room, leaving Lyxander at the counter. As you open the door to leave, you look back over your shoulder to give Lyxander one final glance. You could have sworn you saw him licking the frosting off of Don't Eat, but you shake your head and make your way to Pete's Kitchen, to take on one of his quests. There, he assigns you the task of retrieving a muffin from the Bake Stop. You sigh and drag yourself back from where you just came from, your legs tired. When you open the door, Lyxander is sitting at the counter once again, head turned coyly, with a smirk on his face.

"I know what you’re thinking," he says.

Original art on background by Subeta staff artists
Trophy overlay is a recolor of the item Vanilla Cupcake Ornament, with small edits by 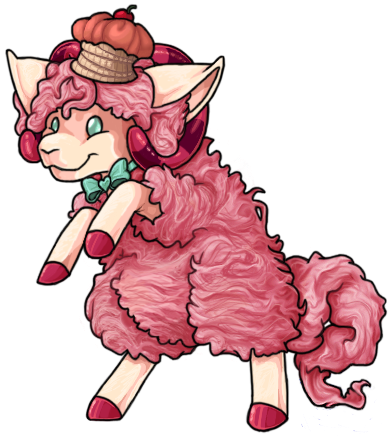 (x) by User not found: clockwork

Note: Lyxander's story/character is Subeta based, so I have certain headcanons about his place in the Subeta universe; anything pertaining to his relationship with NPCs is not actually canon nor has anything to do with the site.

I consider Lyxander to be Fantine's pet Devonti in the story. That's why she seems so flustered about leaving Lyxander unattended; he is her responsibility. She taught him how to be a baker and brought him to help at the store when he was old enough.

Unrelated to story/character: Lyxander was made as a Twilight Ghostly June 6th 2011; made into a Sweetheart Devonti February 5th 2014.

Baking By The Book