Aegaeon has a minion! 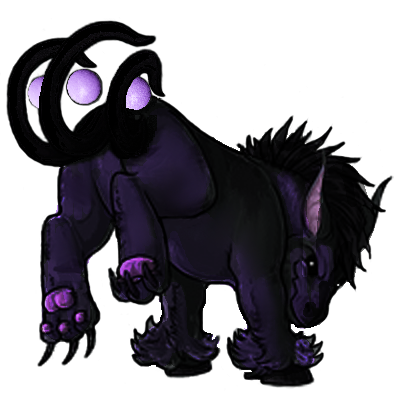 “The Land of Dreams, that mystical realm, where the oddest of visions appear, come wander through scenes of joyful peace, or stampeded through nightmares of fear. Dare we open those secret doors, down dusty paths of mind, in long-forgotten corners, what memories we'll find. Who rules o'er the Kingdom of Night, where all is not what it seems? 'Tis I, the Weaver of Tales, for I am the Dreamer of Dreams!"
~Brian Jacques~

The Night Mare Aegaeon does not rely on second-rate horror films or trivial embarrassing moments to form the nightmares she projects on her assigned recipients. Her dreams are always original, creative, and terrifying.

The starting scene seems mundane. The young lasirus flies over his father's wheat field, pulling faces at the hikei farmers working hard to bring in the last of the season's crops. He wheels over great bales of hay and barns red as the Red Rreign's scales, ignoring the little voice in the back of his head that tells him to go home and do his chores. Such a fine autumn morning deserves a good aerial view.

The change of seasons comes without warning, painting the fields white and forcing the colorful leaves to turn brown and drop. The winter wind strikes with a force that sends him wheeling back. His slender bones turn white, shattering like those icicles knocked loose from the barn door as the bovynes go to pasture. The shock of falling is nearly enough to wake him but Aegaeon is not through with him yet. He lands safely in a great pile of powdery snow, raising his body with finger-claws that have often scored marks in the beam of Father's barn. He may look ridiculous hobbling down the road like a land creature, but at the moment all he cares about is the warm hearth and Mother's comforting words. The blizzard worsens until he can no longer see the house. He stands in a drift nearly his height, shivering and crying softly until the world starts to fade to black.

Aegaeon blankets him in deeper sleep as the call of the Night Stallion alerts her that it is time to move on. The young one will remember only bits and pieces of the dream.

Her next recipient nurses a gluttony so disgusting it is nearly enough to stir feelings of dislike. Night Mares are neutral for good reason. It would not do for creatures of such power to favor individuals. Their job is to weave stories of the subconscious, not to act as the scales of justice for those they serve.

The wealthy archan snores heavily as Aegaeon steals into his bedchamber, a shadow stirred by the breeze coming in through his curtain. This is the fourth time this month she has entered this room plated with gold leaf and mirrored panels of ivory. Not one of the fancy glass sculptures littering the room was earned honestly, though the minions doing his dirty work dare not so much as whisper a word against him. He turns over with a grunt, gold-dipped claws wrapped around a stuffed bear.

Aegaeon grows tired of her efforts being wasted. It is time to try a nastier approach.

Aegaeon reaches for the presence of Insidious in her mind, making good use of her own little minion. The inky blob uses every fiber in the carpet to aid his progress until he is situated under the bed, directly beneath the archan's head.

Aegaeon is able to observe as Insidious lives up to his name. He is a shapeless threat in the beginning, becoming a gang of thugs, a red-clad assassin with a bloody knife, and an agent of the Subeta Tax Agency as the dream progresses. Insidious takes whatever forms the corrupt banker's imagination cares to form. His own shadowed self always lurks behind the puppets he creates, adding a sense of malice that will haunt the archan long after the dawn hour. Insidious will not leave his assigned post until the banker improves his behavior or goes mad.

She can move between bodies of land as easily as forming a thought to follow the race of Atebus across the sky. Stories inspired by the bitter cold of Arctic Frost give way to abandoned temples and wells gone dry in the Sacred Lands. She could spend eternity rounding the globe on errands for the Night Stallion but even an eternal creature longs for the comforts of home eventually.

No mortal can reach the Dream Realm. It is a majestic world of obsidian structures with roofs that open to the sky. The Night Stallion's palace stands at the center, its twelve columns reaching into a bank of silver clouds that never grow nor shrink. The Mares have smaller homes of their own, forming a protective ring around the abode of their beloved leader.

Aegaeon walks the hall of the Learning Ward with a measured pace, nodding to a pair of younger Mares leaving on assignment. The ghostly torches give just enough light to make navigation possible. While Night Mares have a certain level of tolerance for the light of day, they much prefer subtle glows that mimic the soft light of their mother moons.

She pauses before the great doors inlaid with strips of pearl. She longs to feel the caress of Oberon's mane on her back. The Night Stallion gives the call to all Night Mares, reminding them which worlds they must report to and which minds will welcome the products of their labors during the night. He hardly has time to give her a nuzzle each time she walks through the Iron Gates but even an immortal creature feels the pangs of loneliness now and then.

A visit to the library will be more productive than moping about a thing she cannot change. Great texts are taken from a total of eighty-seven worlds stretched across forty-two galaxies. These are the writings of kings and factory workers alike, penned in moments of mortal peril and great insecurity. The stuff of nightmares can come from any source and fear does not discriminate.

She immerses herself in the writings of Plionius the Paranoid. The poet of Xeton XIV created verses so dark that they were banned in all but two of the libraries of Thetia. He was so plagued by frightful dreams that the Night Stallion appeared to him once, a rare distinction indeed.

She sets her research aside only when her craving for foods grown with ambrosius nectar becomes a distraction. The Hall of Feasting has a magnificent table with a cloth woven from golden spider silk. Great gold platters are spread evenly on the surface, each one offering a distinct treat suitable for the taste of a Dream Realm native. Aegaeon selects a golden apple, enjoying the creamy juice that bursts from the tender skin. Realm food feeds the mind as mortal food suits the needs of more fragile bodies. A mare will not die by going without but diminished thoughts are a sort of death to a creature that relies on thought to communicate.

Amerantis and Agnora enter as she is finishing the last bite. The younger mares go right for the platter of sundrop carrots, a selection Aegaeon has always found repulsive. She is secretly of the opinion that good taste must come with age.

Agnora's pride is so strong that the touch of her mind is almost painful. Amerantis flattens her ears and snorts a soft complaint. No longer able to contain her excitement, Agnora flashes mental pictures of her first assignment to every Mare in the room.

It is not surprising that her target was a child. Aegaeon shakes her head at the replay of the nightmare. Too much reliance on silly cartoon characters and the boring old falling forever trick. Such a lack of originality is a mark of inexperience. Aegaeon lays back her ears. Youth is no excuse for poor work. Agnora's excitement falters and fades, leaving her swishing her tail in confusion as the other Mares turn away. Aegaeon's mental voice is a lash.

"I have watched you sneak out of training to admire the glass gardens and skip required readings that you found dull. You are like a silly mortal colt allowed too much indulgence. Your carelessness will lead to mortals that do not heed the Warnings. You will create the sort of monsters that kill millions because they have no greater guidance than their own twisted version of what their world should be. Stop trying to impress Mares who know their craft and learn what it is to be a crafter or I will have you reduced to the rank of star duster."

Agnora leaves the Hall with head hung low and tail drooping. Other Mares exchange nervous looks. It does not do to displease the love of Oberon and while most have a century of experience, even a good Mare gets lazy now and then. A collective sigh of relief moves through the room as Aegaeon departs.

An assignment has just entered Aegaeon's mind, one which calls her to the bedside of a man sleeping in a cheap motel room. She puts the same care in every assignment, though the minds of adult creatures are easier to work with in most cases. This man's troubled thoughts are with his family a thousand miles away. His futile chase across a ghost town to locate his wailing child has him up at five the next morning, eager to end his business trip and return to his family.

Oberon stands at the entry to the glass garden in his human form, the crystal leaves of the clear trees shooting darts of flaming light over his onyx hair. Aegaeon's form shimmers as she makes the change. He plucks a tiny glass flower and settles it in Aegaeon's long hair as she crosses the galaxy to stand at his side. He moves to nuzzling her neck as her mind-voice laughs lightly.

"I saw how you used the empty signs to signify the emptiness in that mortal's core. You are a master of symbolism, my dear."

She takes his hand, envisioning the two of them standing on the surface of Aegaeon, the moon of Saturn that is her namesake and place of birth. Oberon does not even need to think about creating a portal. With a sweep of his hand, they are there.

Such an intimate moment will not last. Oberon can never be away from his post for long and there are always assignments to be completed by his best Mare. They take what they can get; savoring their growing bond as shooting stars paint the cosmic view above.

skye_raven for letting me adopt her~ <3