Zinnia Nova has a minion! 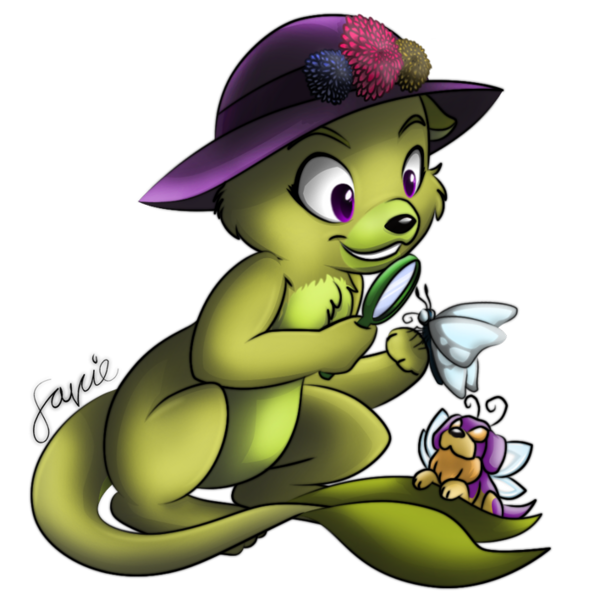 The first day of class is always the most exciting. Looking out on a dozen faces that represent the future of entomology in Subeta sets Zinnia's heart fluttering.

Who would have thought that the gift of a red plastic magnifying glass and a natural fascination for all creepy crawlies would have led her to her dream career of studying the insect world every single day?

She can afford much better scientific tools now and her love of all things that fly, crawl and hop has never diminished.

Her five interns double as teaching assistants, passing out the usual syllabus and collecting the getting to know you survey sheets the students have placed at the edge of each table.

Zinnia is particularly excited to have a bumbus working among the interns of the semester, though the girl is signed up to assist with afternoon classes. The kanis and warador currently on staff have already selected their dissertation topics - his being the breeding cycle of ladybugs and hers being the flight patterns of honeybees in varying climates. Zinnia has no doubt that the other three will present their ideas with the same high-energy eagerness as this first pair. Unlike most professors, she has never been forced to fail one of her interns.

As her students glance over the texts they will be using and how much the major projects will affect final grades, she does her best to match names with the student she believes most likely to belong to them. When given their chances for introductions, most meet her expectations. There is not one in the bunch that gives her a bad feeling. This is going to be a spectacular semester!

Zinnia is never late for her office hours nor does she ever leave before the set time has expired. She is there to hear the worries of freshmen, the hopes of seniors, and everything in between. She delights in visits from old students come to tell her of their success in landing jobs in the scientific world. She even consults with the occasional stranger in need of reassurance that the cockroaches under their sink are not in fact evil robots from Atebus bent on the destruction of Subeta.

Nectar has her own little beanbag bed in one corner of the office. The Beegle is popular with Zinnia's students and colleagues alike. She has a bright pink leash that sees little use and a water bowl specially designed to add flower nectar to the liquid to satisfy both the hound and beetle requirements of her small body.

Minions are not allowed inside the classrooms but most of the professors do keep their dearest companions in their offices. Outside of midterms and finals, it is not at all uncommon for there to be a little minion party in faculty hallways. Those students with approved minions are always welcome to let their little friends join in while they are in class.

Every wall of Zinnia's office contains posters and photographs of insects, many of them bearing fun facts. Did you know that there are insects on every land of Subeta including Arctic Frost but that there is not a single species that has succeeded in adapting to the ocean? Were you aware that insects walked the surface of Subeta 170 million years before Bhakorus or Velosotors? How about the fact that one moth can lay over seven thousand eggs in a single day?

The bookshelf space is dedicated to books she has written or co-authored, bragging such classics as "Dance of the Butterfly", "My Mother Married a Moth", and "The Buzz on Flies: Separating Truth from Stinking Garbage".

She also keeps a mini fridge full of all her favorite treats. In summer, she frequents the farmer's market on Veta Lake, bringing back buckets of strawberries to her little house in Peka Glade. Those she cannot eat in time go into preserves that she spreads over cakes, bakes into pies, or purees into homemade strawberry ice cream.

She leads expeditions to all corners of Subeta over the fall, winter, and spring breaks. Only those undergrad students with very high marks will secure one of the very limited slots not already claimed by grad students.

These are peaceful missions of study and observation. Killing an insect is sure grounds for being dismissed from the team. Those insects Zinnia keeps are made comfortable in glass enclosures with lighting suitable to their natural body rhythms. She is extremely opposed to killing for the sake of study unless it is absolutely vital and she abhors the smell of formaldehyde.

This year's fall destination is to be the Omen Islands.

Nectar always gets excited at the sight of her white travel basket. The beegle keeps hopping in and out bark-buzzing her happiness at going to some new place with plenty of interesting smells and things to chase.

The camera case soon joins the basket as Zinnia does a final inspection of her luggage to make sure she hasn't forgotten anything. She is half-listening for the cab hired to take them to the ferry. Her eyes pass over the portrait above the hearth and she smiles subconsciously.

It is a picture of her looking in wonder at a giant Luminous Moth in the unnamed jungles off the coast of Shengui Guo. The signature printed on the bottom right corner is Gerwin's

He was the first intern to sign onto one of her expeditions back when she was only an assistant professor. His status as a world-famous photographer does not prevent him from sending a Luminaire card every year.

Their mutual love of insects and photography gave them plenty to talk about in the two weeks they spent together. It was a fun challenge, trying to outscore Gerwin in the highest number of quality insect photos taken per day.

She had not realized his fascination for her as a subject was nearly as high as for the bugs.

He'd captured her bent over a fire ant colony, taking honey from a beehive, even holding a stick bug for a class of youngsters to admire up close. Their combined photos went into a photo journal that outsold even her integral entomological text "The Beetle, The Bumbus, and the Blue-Winged Butterfly".

It has become tradition for the interns to write small letters of what they learned and experienced on the trip. A revised edition of the photo journal is released for each class. It is a respected publication in the world of entomology, though Zinnia and Gerwin are the only ones in Subeta who can claim a complete collection of twenty-seven volumes.

The squeal of brakes on the driveway has her hastily picking up her bags and struggling to lock the front door one-handed. Zinnia cannot wait to once again observe her beloved bugs in their natural habitats and to make another lasting set of memories.

There is not a member of the study group that does not come back with a full roll of film and plenty of stories to tell about the excitement of climbing a dormant volcano, eating at a real tribal cook-fire and making lanterns with fireflies in order to share ghost stories under the moonlight. One very artistic telenine has even volunteered to prepare the basic page layouts for edition twenty-eight of the photo journal.

There is no doubt in Zinnia's mind that it will be the finest edition ever set to print.

The Book of the Zinnia Fairy

Delicious Bugs And Where To Find Them

Humbugs and Other Luminaire Pests