Phoenix Rising has a minion! 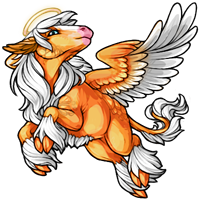 Phoenix may be known today as the innovator that started HoloCorp, Atebus' fastest-rising corporate giant of holographic technology, but he didn't start life as the brilliant creator of new technologies that allow anybody from any walk of life to experience the thrills of exploring the Underground's unknown quadrants or spending a day living it up like Saggitarius.

Okay, so maybe he was born a child prodigy, but it took him ten years to nourish mind and body to the point where he could actually build a hologram.

Spacer 1 was Nightwiish's first creation, a simple cylinder of metal...a glorified hubcap that was top-heavy and fell down a lot. She could project limited images uploaded from a primitive SubeSoft Doors 11 computer. She also tended to shoot unwanted sparks out the antennae at the back of her head. She was a birthday present for Phoenix, one the holographics enthusiast adopted with great joy. With Night's mechanical brilliance and Phoenix's holographic genius, they started up a little booth to sell homemade toy robots that could whir around the living room floor and project thirty second video clips on the nearest wall. Night would eventually lose her taste for business matters when she was offered a position as Robotics Systems Engineer on the Space Station but Phoenix would take over the booth, growing it and expanding it and turning it into a viable business.

Despite their different paths in life, the two remained steadfast friends and Night came up with a unique bot as a very special birthday gift for when Phoenix celebrated his thirtieth year.

7's artificial intelligence chip is second to none. She can solve the most complex brain teaser in under a second but she also has a compassionate streak longer than the span of the galaxy. She can crack through Phoenix's foulest mood with a well-timed joke and when Phoenix is feeling down, 7 starts up her mood booster playlist without even needing to be asked.

Spacer 7 may be a robot but there is a hint of kitten programmed into all those gears and wires. Phoenix keeps a little laser light in her pocket. She never grows tired of watching 7 zoom around the room, doing her best to trap that dot of light between mechanical paws.

The Hub is far more than just the place where Phoenix lives. It is a complex, multi-faceted hive of life and technology with spoke-tunnels connecting its many components and a central lift lock to take visitors and high-security personnel alike to any level where they wish to go...assuming they have proper clearance, of course.

The Market Sector is the heart and soul of Atebus' economy outside of the Masquerade season. There you will find five goliath shops selling wares ranging from imported abominable snowballs to native Ziaran masks. The three restaurants competing to please the taste buds of distinguished guests serve both Atebus favorites and more well-known Centropolis fare. Delizioso requires a reservation at least six months in advance and only peddles the finest gourmet cuisine. The Happy Ontra is much more family-friendly with plenty of fun meal options like Bhakoru Burgers and Papaya Priggle Pancakes for the kids. Medicontra V.2 serves as a consulting clinic for those unlucky visitors in need of medical care. The facility can handle even the most pressing emergency, though patients are always advised to see their regular doctor (or at least pay a visit to the Healer) upon returning home.

The Commerce Sector is where business is conducted, be it the drudgery of pushing papers in one of the three massive corporate headquarter offices or seeing to the necessities of logistics in the import/export department. Start-ups and established businesses alike have open branch offices on the ground floor of this sector...those that can afford such pristine quarters, that is. Subeta Bank has a branch here, as does the Subetan Trade Alliance, organizers of the ever-popular Trade Center.

The Secure Sector sees to the needs of the station, from your basic monitor screens to the state of the art computer command center that is partially responsible for running the ever-popular (and vital) Holodeck. Only from this level can qualified personnel access the bridge at the very top of the station capable of operating the Holodeck as a life boat space craft in case of war or emergency. It also allows for access to the maintenance and storage compartments at the very bottom level of the station.

The Residential Sector is home to only the wealthiest Subetans...those so rich they turn up their noses at the luxury apartments and mansions SAI has on the market. This particular sector is almost like a mini-planet, with such luxuries as an organic grocery store, a gym with all the best equipment on the market and schools that prepare young minds for college and beyond. (While there is no physical Subeta University campus aboard, accepted students do have the option to take nearly all of their classes online, preventing the need for permanent residents of the station to travel to Subeta Main if they wish to avoid doing so.)

The apartments of the Residential Sector come standard with three bedrooms, two full baths, a fully stocked kitchen, private pools, entertainment rooms with all the technological toys of today and a veranda overlooking a view of the bustling city of Ziara.

Phoenix doesn't get to spend a lot of time at home with his demanding schedule as both the CEO of HoloCorp and the Chief Engineer of the Hologram Division with over ten thousand hours of training on the intricate workings of the Holodeck. That isn't to say he doesn't relish his rare quiet moments sipping tea and eating his way through three pints of strawberries (his favorite food, hands down.) Of all the luxuries afforded a gentleman of his impressive status, free time and quiet moments to think are a commodity he often cannot afford.

Despite the occasional bout of weariness, though, he wouldn't trade his life for that of any other person. He gets to work with holograms every day!

Phoenix turned a few simple holographic projection devices into a multi-trillion dollar business that now does business all over Subeta and Atebus. His secret ambition (known only to himself and Spacer 7) is to send manned missions to the other planets in Subeta's solar systems and maybe someday even establish colonies there. The way HoloCorp is rising on the Subusiness Top 100 Companies list, that dream may just become a reality in the course of his lifetime.

He relies on his assistant and the two under-secretaries of his personal office far more than he cares to admit. As a creative spirit, he needs to keep his mind free for thinking up his next great invention, not spend hours doing dull paperwork. Fortunately, he has the best staff in the world, right down to an exceptional custodian working his way toward a holo-engineering degree. His employees would never dream of slacking or taking undue time off and are well compensated for their hard work and dedication. They have one of the most lucrative benefit packages offered by any Subetan employer. Working for Phoenix is a pleasure and an honor for each and every Subetan he hires. There isn't one of their number that would dream of selling out his secrets to a competitor...not that there are many of those left at this point.

Some of the devices created by HoloCorp are mere entertainment gadgets not good for much besides a few hours of fun. Others are of the highest quality military-grade steel, used to diffuse tense situations between warring tribes or distract threatening individuals so the Subeta Police can bring them in with minimal casualties.

By far, HoloCorp's most recognized contribution to society is the HoloDeck.

Is it a world in and of itself or merely the most brilliant virtual reality ever dreamed into being? Not even the victors of the Holodeck can say for sure. On top of its use as a training tool and an ultimate dream for thrill seekers, it is also one of the most advanced computers ever brought online, serving as a backup for vital functions and a last-resort emergency backup system for all that is vital to keeping the Hub afloat and its citizens alive.

There are the miniature HoloDecks intended to give the average citizen a taste of the thrill one gets from entering another world but these cannot compare to the fierce competition of the true Holodeck.

Only a select handful of the most skilled strategists and gamers will emerge victorious when they enter the HoloDeck Dome. That doesn't stop a few hundred hopeful contestants from trying. The event is televised, with Subetans inputting their virtual characters from access points all over both Subeta's globe and the moon of Atebus.

Phoenix and his staff never participate. They are there to act as referees and to encourage contestants not to throw in the towel too readily when the going gets tough. Phoenix particularly loves his role as Risen, a great flaming archan that is the form he takes within the game.

Within the first week, the players are winnowed down drastically by traps and monsters in mini campaigns to the core surviving group. It's at this point the true game begins.

Virtual creatures morph from the mildly annoying to the ferocious and grotesque. The cunning and difficulty of each trap increases by the minute. Puzzles require a solution in mere seconds where once the time allowed was limitless. The final few levels are no place for a novice or a Subetan with a weak heart.

The designers and engineers and their support staff that create and run this annual game with visual, auditory, and tactile enhancements are in their own subdivision of the Holodeck. Phoenix loves working with them on occasion and must approve everything from music to story theme to the key locations players must find in order to advance.

The victors get not only major bragging rights but a share of the massive pool of both financial and material prizes donated by sponsoring businesses, generous individuals and HoloCorp's Deck Fund.

Phoenix loves shaking hands with the victors and seeing his picture appear in all the papers but if truth be told, he finds just as much joy in handing out prizes to those who made the effort to get a spot in the competition in the first place.

You never know. One of them could be the next brilliant mind just waiting for a chance to shine.