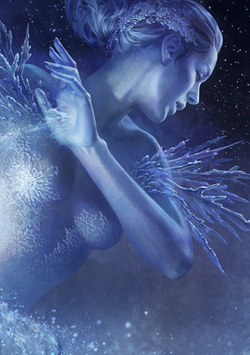 The Goddess of Snow

It should come as no surprise that the goddess of winter has an icy disposition. Chione scoffs at the attentions of mortal men who flock to leave hellebore and jasmine boquets at her shrines. She smirks at those females - mortal and immortal alike - that grow jealous of the attentions paid to mere likenesses of her beauty. No statue of Chione ever suffers the stain of bird droppings for long.

The permanent dwellers of Mont Olympus loathe to have her in residence, with the exception of her parents. As god of the North Winds, Boreas can call up a steady breeze at will. When Chione was still a babe in arms, he delighted in blowing the little ice crystals she shaped to every corner of the heavens to show off their beauty and perfect symmetry. Her mother, Oreithyia, would take her to secluded mountain passes never seen by mortal eyes. When she was very young, Chione would create ice rinks even in mid-summer to be shared with her brothers and sisters. When she wanted to tease Daphne, she would freeze the buds on laurel trees into perfect ice blooms that would break off easily with a twist of the wrist.

She shaped Hathor the ice dragon to be a companion when her older sisters went away to assume their duties as nymphs of earth and stream. She takes Hathor everywhere she goes and he will not eat unless the food is offered by her own hand.

She dropped two feet of snow on the peak of Olympus on the day she was told she would wed Poseidon. Zeus himself had to deal with the annoyance of tunneling his way out of his golden palace and thousands of crones muttered the name of Chione as a curse as ripe crops blackened and fell from the vine. Chione swore that she would freeze the oceans of the world and leave the sailors to sit and starve for one full year. Her mother ignored her ranting as the bridal gown was fitted and a net of seashells was arranged in her hair.

Poseidon granted her the oceans of the frozen north as a wedding present. She had never seen a mortal land that clung to its snows even at the height of summer. His generosity and gentle hands won over her affections in time, but no amount of gifts could soothe her restless spirit for long. Poseidon made her a gift of magical water trapped in a globe created by the Fates. With it, Chione could visit any mortal realm and see a thousand winter lands shaped on a thousand different worlds.

On those rare occasions that she gets the urge to see her home among the clouds, she is always welcome at the ice palace she shaped on the outskirts of the heavens. Delicate staircases of palest blue let out on balconies of pale purple and midnight blue that shift with the rich colors of the aurora borealis. Ice chandeliers grant light by pale blue flames that come to life upon her entry and extinguish the moment she departs. Her servants are mostly shaggy white creatures capable of moving thick chunks of ice without feeling the bite of the cold wind though she does keep a lesser god for a cook. Her name is Dyoni and she can make a cut of caribou steak so tender that even the icy heart of Chione will warm as she chews. Chione spoils Dyoni with robes that will not let the cold seep in despite wind chills seventy degrees below zero.

Subeta is just one of the many worlds Chione likes to visit. She takes on the form of a glacier demi, one of many forms she is able to claim to suit her mood. Summer berries are a weakness she cannot overcome but these are hard to come by for a goddess unwilling to venture to lands that thaw. The fruits of Ikumoradeekanox are like nothing else in the universe but even the cool surface of Atebus is much too warm for the goddess of snow and ice. Chione has learned the value of good bartering, relaxing in an icy cave off the coast of Arctic Frost and allowing them small workings of magic in exchange for odd fruits and berries that will add new and exciting flavors to Dyoni's brilliant creations.

You will find yourself with an ice crystal that glows eternally or a potion that grants you skin like a frost giant if you make her an offering of a frost berry bunch, a frozen fruit, or a purple scale fruit but you would do well to avoid offers of a slugg fruit or a fruit of facial hair. She despises brown and green, reminders of the threat of new seasons coming to put an end to winter. She may only hex you with an icicle beard for a week, though if she is in a particularly bad mood, she has been known to freeze mortals into the heart of a glacier for half a century.

Apple Of My Eye Snowball